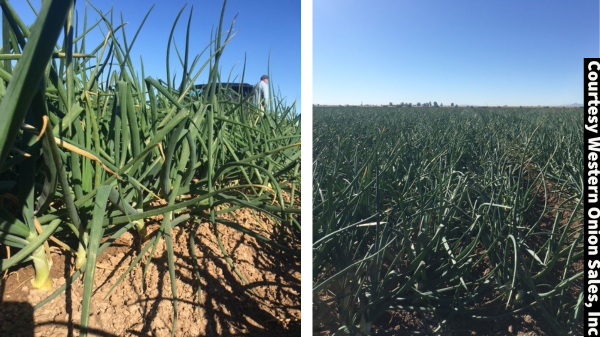 Though not always associated with summer, plenty of potatoes move from June to September, too, according to Greg Zdroik, director of grower relations, sourcing, and logistics for grower-shipper RPE, LLC BB #:105471 in Bancroft, WI.

“Our top varieties are russet Norkotas, red Norlands, and yellow Columbas,” he says.

Most of RPE’s russets are grown in Colorado, Idaho, and Wisconsin, while red and yellow potatoes are mainly grown in Wisconsin, North Dakota, Minnesota, Colorado, and Idaho.

In the world of onions, summer is a very good time of year.

“We’re year-round, but spring and summer typically bring in a new crop, and you transition from storage to fresh—that’s always exciting,” he enthuses. “For us, we’re close to or at the point of origin for consumers.”

Summertime also follows close on the heels of the U.S. sweet onion season in Texas and Georgia.

Texas begins harvest of its proprietary Texas 1015 Sweet Onion (or TX1015) in March in the Rio Grande Valley, with supplies available until June according to the South Texas Onion Committee.

Georgia’s kickoff of the Vidalia sweet onion season begins in April. This year’s official opening pack date was announced by the Vidalia Onion Committee and Georgia Department of Agriculture as April 12 and runs through August.

Sweet onions were once only a summer crop, but times have changed for the better, notes Walt Dasher, vice president of Glennville, GA-based grower-shipper G&R Farms BB #:114342.

“It used to be we saw higher sales of Vidalia onions than Peruvian onions, and sweet onions were more of a summer crop,” Dasher points out.

“But thanks to the popularity of Vidalia sweet onions and consumers learning the versatility of sweet onions, we’re now seeing consistent year-round sales.”

He credits this to “the consistency and similarity of our Peruvian sweet onion program.”

This an excerpt from a spotlight feature in the May/June 2022 issue of Produce Blueprints Magazine. Click here to read the whole issue.