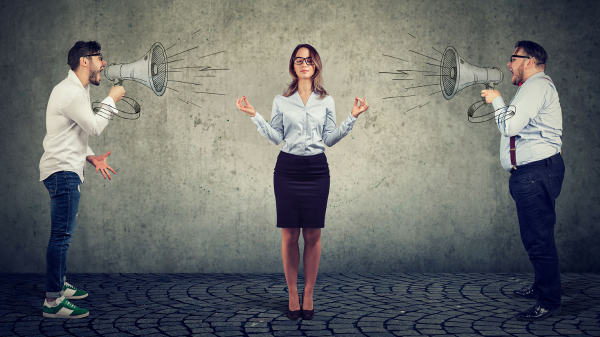 It’s no surprise, then, that politics are seeping into all sorts of discourse—including those in the workplace.

One approach is simply to ban political discussions in work contexts.

A startup called Basecamp tried that last year. One third of its employees chose to resign in response.

Writing in the Harvard Business Review, management professors Nour Kteily and Eli J. Finkel grapple with politics in the workplace.

“We notice and interpret information in ways that serve our political allegiances,” write Kteily and Finkel. “As the writer Anaïs Nin put it, ‘We don’t see things as they are, we see things as we are.’ . . . Bias is not random. . . .

“Even if edicts against political speech could eliminate the influence of politics at work—which is unlikely, given that political motives will continue to distort perception in subtle yet deep-seated ways—such rules have major costs. For one, the line between political and nonpolitical speech is hazy.”

The authors cite matters such as institutionalized racism. Is this merely a political question, or does it have real effects in the company’s own practices?

“Are federal masking mandates just grist for the cable TV mill,” ask these authors, “or do they affect the safety or personal freedom of any employee who’s asked to travel for work? And who makes those determinations?”

One strategy the authors mention is self-distancing: how would a political conflict seem to a neutral third party who has the best interests of all parties in mind?

Another: “One helpful approach is to introduce employees to the power of making simple if-then plans. For example: ‘If I start feeling indignant and morally righteous about a colleague’s factual claim, then I’ll ask myself whether I might be in the grip of naïve realism.’”

Given that it would take a philosophy professor to define what “naïve realism” is, this is probably not a practical strategy. (In this context, it means something like simplistically equating your own opinion with actualities). In fact, I doubt that many philosophy professors are capable of viewing an issue with such impartiality.

The authors also recommend keeping abreast of current trends (or, shall we say, prejudices): things that were not considered offensive a decade or two ago may well seem so today.

Like many such discussions, Kteily’s and Finkel’s comes across as well-intentioned but overcomplicated and impractical.

Who, in today’s business climate, has time to sort through complex issues like cognitive bias?

I think most of these issues can be dealt with much more simply and effectively: by focusing on good manners, decency, and courtesy—ideals that unfortunately sound old-fashioned today. But many present-day aggravations occur precisely because such values are considered old-fashioned.

A company can deal with most such issues simply by insisting that respect, courtesy, and decency are expected of all employees at all times—both with coworkers and customers—whether they are discussing politics, religion, or anything else.

People cannot be expected to agree. In fact, no two people agree 100 percent on everything. But a return to the basic civilities (known to all, though perhaps not practiced by all) can prevent many hostilities.

These studies suggest, for example, that people on the left are especially apt to notice bias, but primarily when it’s against socially disadvantaged groups, whereas those on the right are less inclined to notice bias across the board. Intriguingly, right-leaners are apt to treat groups more equally, even as they overlook evidence of unequal treatment.