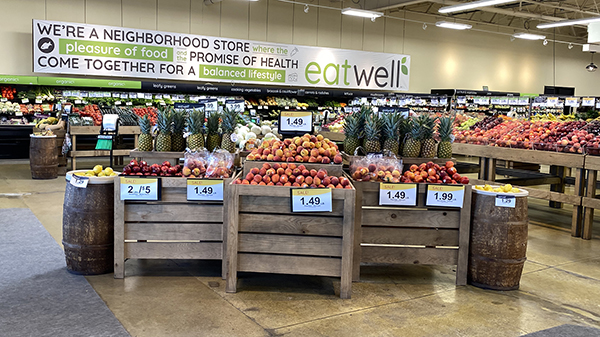 This store opened in June 2020, a few months after the bankruptcy and closure of Lucky’s Market. Much of the store looks the same, minus the Food Glorious Food on the wall in the produce department.

COLUMBIA, MO — I happened to spend the weekend in Columbia (home of my Alma Mater, University of Missouri) for an event, and saw that the Lucky’s Market had been converted into a new concept: Eatwell by Schnucks BB #:105541.

I visited Lucky’s shortly after it opened so I was curious to see the difference. To be honest, much of the store was the same, except for the Food Glorious Food signage missing on the wall of the produce department.

This is the first Eatwell store from Schnucks. It opened in June 2020, a few months after the departure of Lucky’s. We were there in the late afternoon on a Saturday during offseason — only summer school was in session — so it was relatively quiet.

Back in my college days this location was a Jewel-Osco drug store. It laid empty for a few years before Lucky’s opened. Adjacent to downtown Columbia, walkable to a lot of student housing for Mizzou, Stephen’s College, and Columbia College, this store fills a bit of a food desert.

I lived a few blocks from this site when I attended Mizzou, and as a bicycle rider, it would have been my store of choice. Instead I had to get a ride to the nearest Gerbes or Walmart nearly two miles away.

Take a look around Eatwell. We may see more of this concept from Schnucks as retailers look to capitalize on this niche of the market.