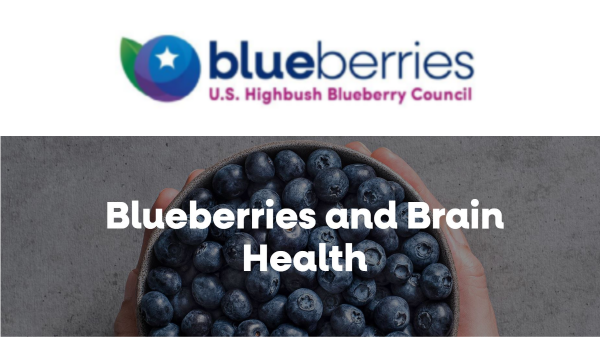 FOLSOM, Calif. – A new research study published in Nutrients finds that blueberries have cognitive benefits. More specifically, the equivalent of a half cup of fresh blueberries per day, consumed as freeze-dried blueberry powder, was found to help middle-aged individuals against cognitive decline when implemented early in at-risk individuals.1

This is an important finding given that in the United States, nearly six million older adults live with dementia. Since limited treatments for cognitive decline exist, preventative approaches and mitigation of risk through proper nutrition are of increasing importance. Given that neurodegenerative changes associated with cognitive decline start in midlife, this research indicates that blueberries may present an opportunity for early intervention, by targeting modifiable risks like poor nutrition and related metabolic disturbance. 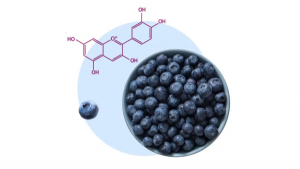 The randomized, double-blind, placebo-controlled trial, “Blueberry Supplementation in Midlife for Dementia Risk Reduction,” looked at the impact of blueberry supplementation to produce measurable cognitive benefits in the context of aging and insulin resistance. Participants (n = 27) were overweight (BMI > 25) men and women 50 to 65 years old with subjective cognitive decline and moderate insulin resistance.

Over the course of 12 weeks, participants were randomly assigned to consume either freeze-dried blueberry powder or placebo powder daily. Participants were asked to consume the powder with either their morning or evening meal, mixing it with water. Pre-and post-intervention assessments of cognition and metabolism and exploratory measures of peripheral mitochondrial function were conducted.

The blueberry group experienced improved performances on measures of lexical access, such as letter fluency as measured by the Controlled Word Association task, improved performances on measures of memory interference, such as fewer recall intrusion errors as measured by the California Verbal Learning Test and reduced memory eroding difficulty in daily life activities, such as reduction of forgetfulness, as measured by the Everyday Memory Questionnaire. The blueberry group also experienced correction of peripheral hyperinsulinemia, which is associated with neurodegeneration in the brain, as well as a significant decline in fasting insulin levels.2

Based on these findings, the study authors suggest that the potential mechanisms for these findings may be associated with anthocyanins and proanthocyanidins, the bioactive flavonoid compounds found in blueberries responsible for their vibrant blue color. Importantly, these results provide support that blueberries may induce metabolic and other benefits that could serve as an early intervention for preventing the cognitive decline associated with aging.

“This is the first study of its kind to look at blueberry supplementation in middle-aged individuals at risk for future health problems and late-life dementia,” said Robert Krikorian, PhD, Department of Psychiatry & Behavioral Neuroscience, University of Cincinnati Academic Health Center and the study’s lead investigator. “Importantly, this research provides evidence that blueberry supplementation can improve cognitive function and correct high insulin levels in these participants with prediabetes.”

The study, which was supported by funding from the U.S. Highbush Blueberry Council, BB #:162393 builds on previous research in this area, which has demonstrated improvement in long-term memory performance with blueberry supplementation in older adults with mild cognitive impairment.3 It also supports previous research that found an association between blueberry consumption and improved metabolic function in at risk individuals, such as an improvement in insulin sensitivity.4

Further research is needed to look at blueberry supplementation over a longer time period, with a more robust sample size. Additionally, longitudinal cognitive assessments would be of value to assess the influence of blueberries on the progression of cognitive decline and to more thoroughly investigate the mechanisms of neurocognitive benefit.

“While further studies are warranted, our results provide novel and exciting data regarding the potential of blueberry supplementation as a preventive intervention,” said Krikorian.

With Brain Health Month on the horizon in June, tailored resources from USHBC are available now in the Brain Health toolkit, including ready-made social media content and digital ads, tip sheets, a research deep-dive (including this study), mouthwatering recipes, eye-popping blueberry images and more.

The USHBC had no role in study design, data collection, data analysis, data interpretation, or writing of the study. For more information on blueberry nutrition research visit blueberrycouncil.org/health-professionals/health-research/.

The U.S. Highbush Blueberry Council is an agriculture promotion group, representing blueberry growers and packers in North and South America who market their blueberries in the United States and overseas, and works to promote the growth and well-being of the entire blueberry industry. The blueberry industry is committed to providing blueberries that are grown, harvested, packed and shipped in clean, safe environments. Learn more at blueberry.org.