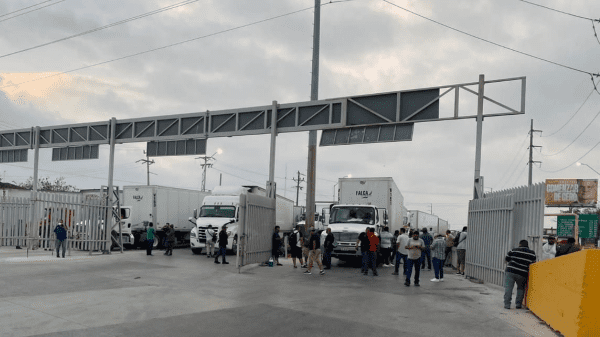 There have been some positive signs for improved produce truck crossings from Mexico through Texas border ports of entry, but major backups remain.

However, Abbott said April 13 that he signed a memorandum of understanding with the governor of Nuevo Leon, which will halt the extra inspections at the port of Laredo, in exchange for enhanced border security on the Mexican side.

Abbott has asked for meetings with other Mexican governors and urged people to encourage Mexican president Andres Manuel Lopez Obrador to address security and drug cartel activity at the border.

In the meantime, Lance Jungmeyer, president of the Fresh Produce Association of the Americas BB #:144354, said the extra inspections of trucks continue outside of Pharr, TX.

“Abbott said inspections would remain elevated until each governor comes to the table,” Jungmeyer said April 14. “Tamaulipas governor is seeking a meeting. Crossings this morning are very slow. Some trucks that were diverted away from Pharr in recent days are starting to trickle through at other Texas ports, Arizona and elsewhere.”

He said FPAA has been working to ensure that “USDA inspection resources, CBP and others are ready to go to handle increased volumes in Nogales, but our goal is to have the border supply chain re-opened today because this is crippling businesses everywhere.”

The Biden administration has criticized the governor’s actions.

“Governor Abbott’s unnecessary and redundant inspections of trucks transiting ports of entry between Texas and Mexico are causing significant disruptions to the food and automobile supply chains, delaying manufacturing, impacting jobs, and raising prices for families in Texas and across the country,” Press Secretary Jen Psaki said in a statement.

The Dallas Morning News reported April 14 that senior officials in the Mexican states of Chihuahua, Coahuila and Tamaulipas said are seeking agreements with Abbott to end the extra inspections and get the border moving again.

Also, CPB said truckers ended a blockade protest April 13 on the Mexican side of the Pharr-Reynosa port.

The International Fresh Produce Association BB #:378962 said April 13 it is encouraged by recent announcements that some of the border crossings in Texas have been reopened.

“The action by the State of Texas has resulted in a huge backlog of fresh produce. In some cases, there are reported delays of 30+ hours at the border, with the state inspections interfering with the responsibilities of U.S. Customs and Border Protection, which is already tasked with border inspections and security,” said IFPA chief policy officer, Robert Guenther.

“In turn, produce that was destined to United States consumers, in some cases, will have to be destroyed because of the perishability of our products. This will result in millions of lost economic production not only in Mexico but to the state of Texas and potentially other border states that are now experiencing similar delays. We urge the Governor to convene all stakeholders impacted by this decision and resolve this issue as soon as possible.”