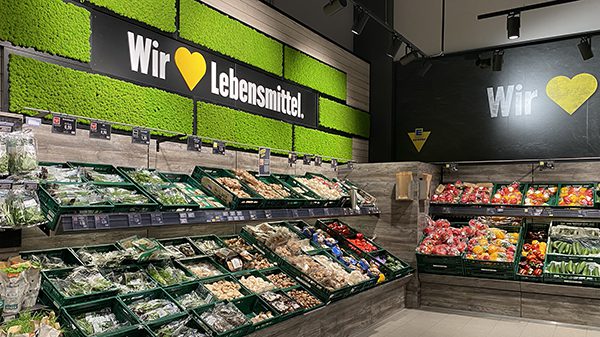 Every time I’ve come to Berlin over the past decade, I’ve googled stores to visit and, until now, hadn’t found THE stores to see.

This one, a massive Edeka Center format, had not only one — but two — in-store growing installations. It included an Infarm, which is also operating in the U.S., and another lettuce installation that looked a little more like theater than actual operational growing and harvesting.

Speaking of entertainment, there was a custom pineapple cutting machine that was not only fun but also produced some of the most delicious pineapple spears I’ve ever had. Cutting in-store with the machine also wasn’t a mark-up from full size fruit, which was awesome.

There also was a concentration on low plastic for plastic-free packaging, including laser-labeled organic avocados and bagged avocados with what appeared to be cotton thread instead of plastic.