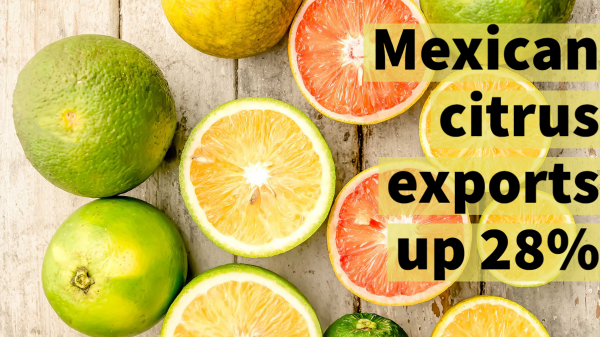 According to the Ministry of Agriculture and Rural Development (SADER), Mexican citrus exports increased by 28.3 percent ($912.3 million) when compared to the same time period last year ($711 million), as reported by The Daily Guardian.

The main destination for oranges, tangerines, grapefruit, and lemons, is the U.S., followed by the Netherlands, Japan, Germany, and the UK, according to data from the Food and Fisheries Information Service (SIAP).

SADER noted that exports of orange juice grew 36 percent between January and July with a value of $278.5 million, while last year that value was $204.8 million during the same time period.

The agency highlighted that “citrus fruits are high-consumption fruits in Mexico and are among the most important export products and have characteristics that distinguish them.”

Mexico is the world’s second largest exporter of lemon with 17.7 percent of the value of global sales, while orange is the perennial crop that contains the largest cultivation area. In addition, Mexico is the fourth largest producer of grapefruit.