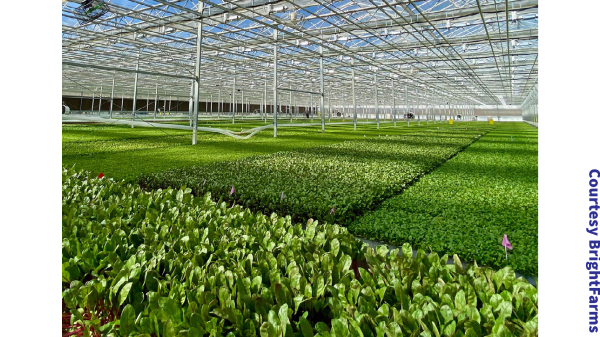 The relationship between BrightFarms and Cox dates back to 2018, and Cox has held a majority stake in the company since 2020. The transaction aligns with Cox’s mission to build a healthier and more sustainable future.

To date, Cox has invested more than $1 billion in sustainable businesses and technologies, and BrightFarms will play a key role in helping Cox reach its goal of building a multibillion-dollar cleantech business by 2030.

“BrightFarms is a perfect example of our Cox Cleantech strategy – positively impacting the world through profitable, mission-driven businesses,” said Steve Bradley, vice president of cleantech for Cox Enterprises. “Over the years, our enthusiasm for BrightFarms and the opportunity to transform the industry has increased tremendously, which led us to want to play a larger role in what they’re doing.”

Fueled by a world-class model and growing system, BrightFarms plans to leverage its market advantage and relationships with the nation’s largest retailers to bring local indoor leafy greens to more than two thirds of the population by 2025.

As part of its expansion plan, BrightFarms plans to construct a national network of new high-tech farms that will accelerate the salad industry’s transition to indoor farming. The company will also increase investment in talent, research and innovation as it expands its product portfolio within the salad category and beyond.

“BrightFarms has built the most advanced network of local indoor farms in the nation. Being part of the Cox team will allow us to scale more rapidly, transforming the salad industry for American consumers,” said Steve Platt, CEO of BrightFarms.

“As we embark on this new chapter, the BrightFarms team extends gratitude to our founder, Paul Lightfoot, for his bold vision and to Catalyst Investors for their early and unwavering support.”

While most salads are grown in California and shipped across the U.S., BrightFarms grows and delivers its greens to local supermarkets as soon as 24-hours from harvest for fresher, tastier and more nutritious salads.

Amid the growing threat of drought in the American West, the company’s sustainable hydroponic indoor farms yield 10 times more leafy greens per acre than growing in a field and use 80% less water, 90% less land and 95% less shipping fuel than long-distance field grown produce.

Cox Enterprises
Cox Enterprises is dedicated to building a better future through our leading communications, automotive and media companies. Our major operating subsidiaries include Cox Communications and Cox Automotive, and we are strategically investing in new industries and emerging technologies, with sizeable interests in clean technology and health care. Headquartered in Atlanta, Georgia, Cox is a global company with nearly $20 billion in annual revenues and brands that include Autotrader, Kelley Blue Book and Cox Homelife. Founded in 1898 by Ohio Governor James M. Cox, the company is a family-owned business committed to its people, communities and planet. To learn more about Cox, visit coxenterprises.com, view our collective impact report at coxcsrreport.com, or follow us on Twitter via @CoxEnterprises or @AlexTaylor_Cox.

About BrightFarms
BrightFarms is a leading provider of locally grown packaged salads, serving the freshest, tastiest and most responsibly grown produce to consumers nationwide. BrightFarms operates hydroponic greenhouse farms in the communities it serves, enabling it to eliminate time, distance, and costs from the food supply chain. BrightFarms’ growing methods, a model for the future of scalable, sustainable local farming, use far less energy, land and water than long distance, field-grown agriculture. Forbes has recognized BrightFarms as one of the “100 Most Consumer Centric Companies” and Fast Company has recognized BrightFarms as “One of World’s 50 Most Innovative Companies” and one of the “Top 10 Most Innovative Companies in Food.” BrightFarms is a subsidiary of Cox Enterprises. For more information, please visit www.brightfarms.com.