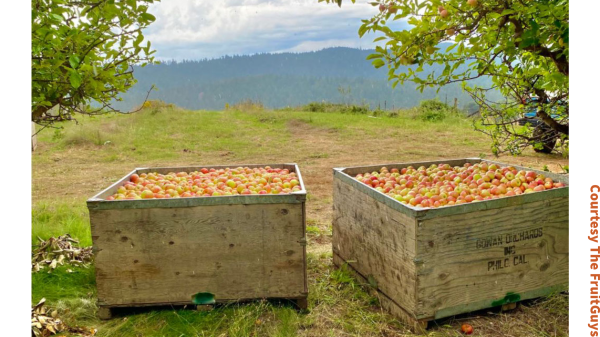 Grower Sharon Gowan shared the view from her orchard at the start of Gravenstein season in 2020.

These sought-after apples have a short harvest season and are only available for a few weeks each year. They can be pre-ordered now for delivery nationwide the weeks of August 16 & August 23.

More than 7,000 acres of delicious Gravenstein apples were in production in Sonoma County during World War II and provided applesauce and dried apples to American troops. Today, less than 700 acres remain due to rising land prices and low profitability due to the apple’s short season and shelf life.

The FruitGuys supports the remaining commercial apple farmers by offering this annual box that provides a national sales channel as well as 16 percent of the proceeds, in addition to purchasing their apples. Farmer Stan Devoto of Devoto Gardens & Orchards in Sebastopol, CA, grows organic Gravensteins and has used the proceeds from previous FruitGuys Gravenstein boxes to graft 300 new trees in his orchard, ensuring biodiversity.

“There are only a handful of farmers that still harvest the Gravenstein apple commercially, and as a company whose mission is to support American farmers, it’s our responsibility to help preserve this historic apple,” said Chris Mittelstaedt, founder and CEO of The FruitGuys. “We’re excited to celebrate and share this iconic, endangered heirloom variety with everyone across the U.S.”

The Gravenstein is a delicious sweet-tart apple prized for baking, sauces, and ciders. Boxes of organic Gravenstein apples can be pre-ordered at fruitguys.com/gravenstein in 9, 16, 25, 50-serving box sizes or a case of 100. Prices start at $33. Free shipping is available in California. For order inquiries, call 1-877-FRUIT-ME (877-378-4863) or info@fruitguys.com.

About The FruitGuys
The FruitGuys is a family-owned and operated B Corporation that delivers farm-fresh fruits and healthy snacks to businesses, schools, and homes nationwide. Founded in 1998, our mission is to empower employees with wellness, support small farms, and fight hunger. For more information, visit fruitguys.com.