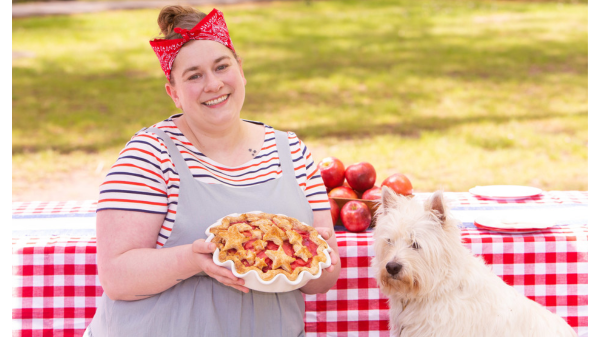 YAKIMA, Wash., May 25, 2021 /PRNewswire/ — There are two big reasons to celebrate this week: Summer is officially just around the corner, and Cosmic Crisp apples are still in season.

Thanks to an increased volume of the Washington State grown apple, fans of the Cosmic Crisp are still able to find them in grocery stores across the country. And to celebrate, the brand is launching new recipes, a retail promotion and a hot air balloon tour.

Cosmic Crisp brand apples celebrate the start of summer with recipes, a retail promotion and a hot air balloon tour.

In the coming weeks, Cosmic Crisp apples will be promoted at a large regional retail chain with over 250 stores. Signage will direct shoppers to the Cosmic Crisp website to see a full menu of summer dishes. Recipes include a plant-based apple “burger,” an on-trend agua fresca, a red, white and blue potato salad, and an apple and cherry pie recipe developed by best-selling author of the Book on Pie, Erin McDowell.

Consumers will have a chance to win Erin’s cookbook through Cosmic Crisp’s social media channels. The brand will also appear in June’s outdoor entertaining themed issue of Real Simple Magazine. And after a pandemic postponement, a full sized and custom shaped Cosmic Crisp hot air balloon will make its debut in multiple festivals across the United States.

As recently reported by Superfresh Growers, the Cosmic Crisp apple has skyrocketed to popularity in the short time it’s been available in grocery stores The brand brought in $4.5 million in sales during April and placed Cosmic Crisp at a strong #11 out of the top 20 brands and varieties last month.

Chatter about the Cosmic Crisp online and on social media continues, with notable figures such as cultural commentator Angela Rye and NFL hall of famer Shannon Sharpe recently calling the brand out by name as a favorite.

“It took over 20 years of classic breeding, research and development through Washington State University to perfect the Cosmic Crisp® apple. And it’s only been on retail shelves for a total of 12 months,” said Kathryn Grandy, Chief Marketing Officer for Proprietary Variety Management, the company leading marketing efforts for the brand.

“Our strong performance in the category is a testament to consumer reception of this new apple. With higher volumes and additional secondary products coming, the Cosmic Crisp® will continue to differentiate the retailers that merchandise and promote the brand,” she added.

“We are thrilled to have another great month of Cosmic Crisp supply, and fresh ways to enjoy just in time as many of us look forward to safely hosting gatherings again,” notes Grandy. “It is the ideal time to promote the brand while the last of these beauties are on the market.”

The Cosmic Crisp hot air balloon will take to the skies at these festivals:

The Cosmic Crisp® brand apple is the remarkable result of 20 years of study and research by Washington State University’s world-class tree fruit breeding program. Classically bred and grown in Washington State, the Cosmic Crisp® is a cross of the Enterprise and Honeycrisp varieties. The large, juicy and red apple has a perfectly balanced flavor and firm texture, making it ideal for snacking, cooking, baking, and entertaining.