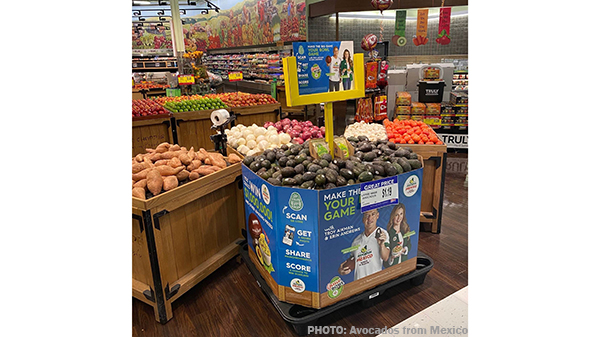 The U.S. imported a historic record of 277 million pounds of Mexican avocados in the first four weeks of the year leading up to the Big Game.

PRESS RELEASE: DALLAS, Feb. 9, 2021 /PRNewswire/ — It’s a green victory for Avocados From Mexico BB #:371130, the No. 1 selling brand of avocados in the U.S. After six years of successful advertising in the Big Game, the company decided to not to air a commercial and shift its strategy to help drive retail sales during the fall season in order to prepare the market for the brand’s boldest Big Game promotion ever.

This new strategic approach paid off leading to new historic records. Despite pandemic challenges, the U.S. imported a historic record of 277 million pounds of Mexican avocados in the first four weeks of the year leading up to the most important guacamole consumption event. This represents a 19% increase vs the same period in 2020, with yet another incredible record of 78 million pounds of Mexican avocado imports in a single week for the first time ever.

“We had plans to pivot our strategy ahead of the pandemic, and I’m impressed with the results in a year rocked by challenges,” said Alvaro Luque, president and CEO of Avocados From Mexico. “We decided some time ago that we wanted to start changing the sales dynamic of the industry and reinforce fall as a key season for AFM in preparation for an unprecedented Big Game push.”

From October to December (OND), the market sustained an amazing 49+ million lb. weekly average in 2020 of Mexican fruit compared to 46+ million lb. weekly average in 2019. “Since we decided to reinforce the promotional strategy for OND two years ago, Mexican avocado imports have grown 27% during this three-month period, a clear indication that we are on the right path,” said Luque.

With 97% market share in OND, AFM established this time frame as a major tentpole within its annual marketing strategy, with hyper-focused shopper and trade marketing efforts to drive consumption. Given the pandemic’s impact on the foodservice sector, AFM pivoted its strategy to focus on driving demand in retail. AFM’s trade and shopper marketing activities in OND supported strong retail demand with programs such as a national shopper marketing campaign featuring a $500k home giveaway, a national incentive contest with over 35 participating retail accounts, consumer and loyalty offers, and an important emphasis on bagged fruit programs. This paid off in 2020: per Nielsen, avocado consumption during OND was up double digits across the U.S, with an increase of 16.5% in lb. volume compared to OND 2019. 1

“A combination of a very strong promotable market and robust trade and shopper marketing programs contributed to driving consumption and demand to sustain our biggest OND ever, a great segue leading up to our record-breaking Big Game season” said Stephanie Bazan, Vice President, Trade & Market Development for Avocados From Mexico.

AFM’s strategy alignment reinforcing avocado sales during the last quarter of 2020 and in the first weeks of 2021 not only resulted in record-breaking imports, but also made it AFM’s most successful Big Game digital campaign with 7.6 billion impressions for the brand. AFM’s “Guac Bowl” campaign was the first-ever fully integrated shopper and digital campaign for the Big Game, including major football celebrities Hall of Famer and Sports Newscaster Troy Aikman and Sports Newscaster Erin Andrews. “Our campaign helped reinforce our association with football in an effort to generate excitement with our retailers and drive baskets for the #1 guacamole occasion of the year,” said Bazan.

Meant to inspire shoppers to take their love of game day guac to the next level, AFM scored big even without a Big Game ad:

“For six consecutive years we had delivered the No. 1 or No. 2 digital Big Game campaigns. We thought we had our formula down and that our performance was maxed out. However, this campaign proved that there is always more room for growth,” said Ivonne Kinser, Head of Digital Marketing for Avocados From Mexico. “We learned that playing hard within a territory that we own like avocado recipes, and with a simplified message aimed to drive purchase intent, can go a long way,” said Kinser.

“Given the impressive results, we will continue with this strategic approach. Following this proven formula, we are already working on the biggest promotional program for Cinco de Mayo,” concluded Luque.

About Avocados From Mexico
Company – Avocados From Mexico (AFM) is a wholly-owned subsidiary of the Mexican Hass Avocado Importers Association (MHAIA), formed for the purpose of advertising, promotion, public relations and research for all stakeholders of Avocados From Mexico. Under agreements, MHAIA and the Mexican Avocado Exporter Producers and Packers (APEAM) have combined resources to fund and manage AFM, with the intent to provide a focused, highly- effective and efficient marketing program in the United States. AFM is headquartered in Irving, Texas.