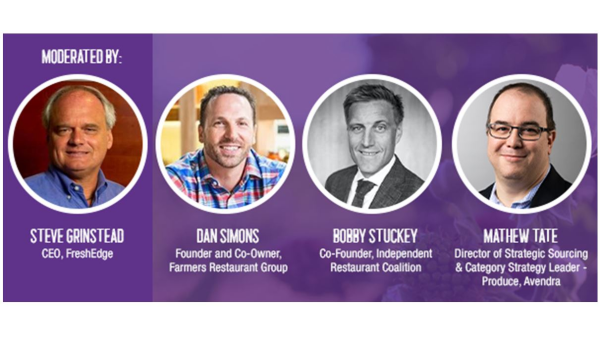 While it’s no secret that restaurants have suffered the past 10 months, those in the day-to-day business say their stories still aren’t being heard enough.

And they have a simple message: Let us open.

Steve Grinstead, CEO of FreshEdge, said on a United Fresh Produce Association BB #:145458 ReFresh webinar on the foodservice industry, he feels like he’s in a tunnel and he can see the light at the end of it, but he doesn’t know how long it is.

Bobby Stuckey, co-founder and master sommelier of Frasca Hospitality Group, Boulder, CO, and co-founder of the Independent Restaurant Coalition, said the coalition speaks for the restaurant owners who have trouble being heard.

“Politicians make decisions based on the information that they have,” he said. “They don’t understand what the farmers and restaurants mean to them.”

Grinstead said that while retail sales of fresh fruit and vegetables are up, foodservice sales are down even more than that, so Americans’ produce consumption has fallen, meaning they’re less healthy.

Stuckey said most people get a majority of their vegetables in restaurants, which is another reason the country needs them to open.

One of the biggest problems he said is the different rules state by state and even county by county.

Without allowing them to open, Stuckey said “I see a huge number of closures in the next eight weeks.”

“I’m worried we’re past the tipping point” for many operations, he said.

Early in the pandemic, Tate said his company was more worried about produce suppliers, but they proved resilient.

2021 Outlook
Dan Simons, co-owner of Farmers Restaurant Group, Washington, DC, said with his restaurants based around the nation’s capital, he forecasts the next three months to be bad for foodservice.

“Then I see a hockey stick,” he said, referring to exponential growth on a chart. “I’m very optimistic for spring and longer term” as outdoor dining opens back up.

Tate is less optimistic, as he sees travel budgets remaining lower for most companies, which will curtail travel and dining.

“People want to get taken care of, that hospitality,” he said, noting that fine dining feels safer to customers, and that social distance feels more normal.

Simons expects that people won’t be as adventurous when they return to restaurants.

“We expect a consumer push toward nostalgia,” he said. “They want what they missed. We will see huge demand of people wanting something familiar.”

Grinstead said it’s important to get the word out that the foodservice industry is still suffering, and consequently, so are Americans.

“Tell your Congresspeople and mayors and make sure they know about this devastation,” he said.