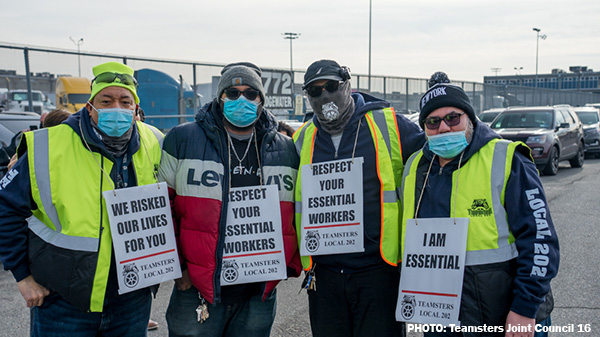 Workers are demanding a $1/hour pay raise and 60 cents/hour to maintain their heath care benefits, according to the Teamsters.

The strike began Sunday, January 17, according to a statement posted by Teamsters Joint Council 16.

Workers are demanding a $1/hour pay raise and 60 cents/hour to maintain their heath care benefits, according to the Teamsters, which says the workers have “kept New York fed through the pandemic as employers cashed more than $15 million in forgivable PPP loans.”

“The majority of the workers have an average base salary between $18 and $21 an hour,” the statement said. “Employers in the market, who collectively bill billions of dollars in annual sales, received more than $15 million in forgivable PPP loans during the pandemic.”

The Hunts Point Market said in a statement they “remain committed to employees.”

“We are very proud to have kept our union workers – the vast majority of whom live right here in the Bronx – working and on payroll with full health benefits as the Bronx has seen an unemployment rate of 40%. Even with the continued uncertainty surrounding the pandemic, we are offering our dedicated workers wage and benefit increases over the next three years that are a multiple of the current annual cost of living,” the statement, published by NY 1 said. “We are continuing to negotiate in good faith with the Union to keep our workers on the job and produce available in our region.”