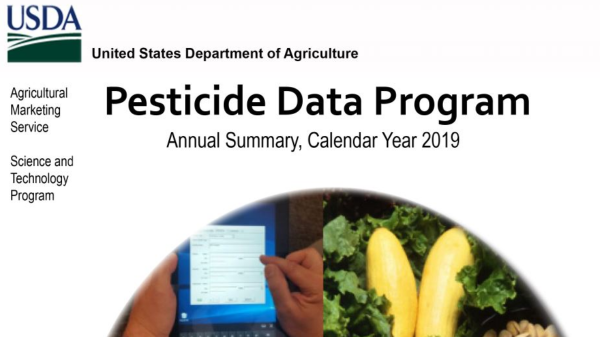 Yet another comprehensive test of fruits and vegetables for pesticide residues gives them a clean bill of health.

Nearly 99 percent of fruits and vegetables tested for pesticide residues showed levels below the tolerance level set by the Environmental Protection Agency (EPA), according to the 2019 report of the Pesticide Data Program by USDA’s Agricultural Marketing Service (AMS). The report was released on October 27.

Researchers washed the samples under gently running cold water for 15 to 20 second, to replicate what consumers are likely to do.

The samples collected actually underrepresent the amount of organic produce in the U.S. market. The report noted, “In 2019, 8.7 percent of the tested samples were organic (847 of 9,697).”

But in 2018, organic products accounted for some 15 percent of all U.S. fruits and vegetable samples.

Furthermore, these figures do not reflect market changes since the outbreak of the coronavirus, which has led to increased produce sales for both conventional and organic fruits and vegetables.

Sales of organic produce increased by 16 percent in the third quarter of 2020 versus the same quarter in 2019 (versus a 10 percent increase in conventional produce over the previous year), according to a report by the Organic Produce Network.

The PDP survey did not break out figures for the organic category. “Samples are selected without regard to country of origin, variety, growing season, or organic labeling,” the report noted.

There remains a great discrepancy between actual food safety from pesticide use and consumers’ perceptions of that safety.

Much of the scholarly literature on this matter is dated, but a recent study of German consumers (published in 2017 in The Journal of Food Protection) revealed that “both organic and conventional consumers viewed pesticides, chemicals, and toxins as the greatest threats to food quality and safety. Evaluating the risks and benefits of pesticide use, more than two-thirds of organic consumers (70 percent) rated the risks as greater than the benefits, compared with just over one-half of conventional consumers (53 percent).”

For a dietitian’s view, Amy Myrdal Miller, MS, RDN, FAND, says, “Pesticide residues on both conventional and organic produce are within limits set by the Environmental Protection Agency. In fact, the limits that are allowable are 100 times lower than what has been shown to be safe for consumption over a lifetime.”

The produce press has pointed out this discrepancy many times, but its causes remain poorly understood. Many tend to round up the usual suspects for blame (Consumer Reports, the Dirty Dozen), but the media reflect and respond to public opinion as much as, or more than, they influence it.

It will be necessary to dig deeper to understand the difference between the safety and the perceived safety of fruits and vegetables.