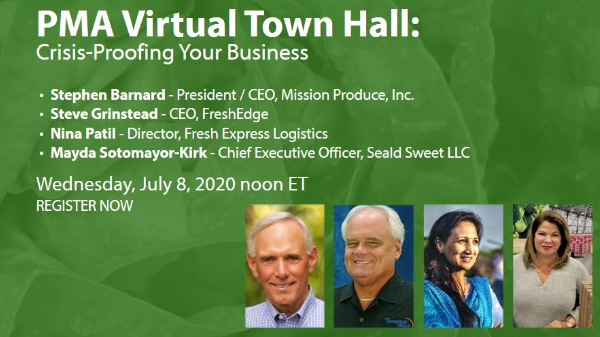 If you like the way things are going right now, you’re going to love the next 12-18 months.

That may sound ominous with the damage being done by the pandemic and our nation’s leaders’ decisions about it, but three U.S. produce leaders offered optimism during the weekly Produce Marketing Association BB #:153708 town hall webinar, July 8.

People have to eat, and the produce industry’s people have shown to be resilient and innovative, was the consensus.

“It’s all about the people,” said Steve Grinstead, CEO of FreshEdge, which owns produce and food distributors, including Piazza Produce BB #:102623, Get Fresh Produce BB #:161388 and Indianapolis Fruit BB #:102610. “We survived this catastrophic event because of the people.”

Some parts of the business will change permanently, but others will return.

“I don’t think us humans will adapt to living in a bubble,” said Mayda Sotomayor-Kirk, CEO of Seald Sweet LLC, BB #:161579 a Greenyard company, Vero Beach, FL, noting that she still needs to have a great restaurant meal and give hugs to friends and family.

“It’s taking longer than expected,” she said. “I think a vaccine will change this.”

When Grinstead thinks about the overall produce distribution business, he looks at it in segments, he said.

For instance, retail is stable. Foodservice will continue to come back closer to where it was pre-pandemic, but no doubt, some restaurants and chains will go out of business, Grinstead said.

Schools and universities are still unknown based on how many students will be allowed back and what the rules will be, he said. Hotels are struggling, as are sports, which won’t likely return to normal until mid- to late next year, Grinstead said.

When it comes to his operation, Stephen Barnard, President/CEO of Mission Produce, Inc. BB #:118126 Oxnard, CA, said they’re looking at what’s really necessary to the business. For example, people traveled each week, and now they’re not, and they’re not missing much.

“Zoom meetings are more efficient, but I still like to see the growers,” in person, Barnard said. While weekly operational meetings are better done virtually, business development still needs to be in person, he said.

Grinstead said his company is also looking to grow through acquisitions.

Sotomayor said one of her company’s primary items is citrus, which has been extremely popular during the pandemic, but her company and competitors need to be careful not to get too greedy.

“We need to concentrate on movement and growing demand for citrus,” she said.

Sotomayor said the company’s communication with its growers has improved in the past several months, and she expects that will be a business practice that stays.

Grinstead said there are so many things about the pandemic that are political and irrational, both from leaders and consumers.

He said companies need to ask themselves, “What are we in control of? Then work on those things the best you can.”