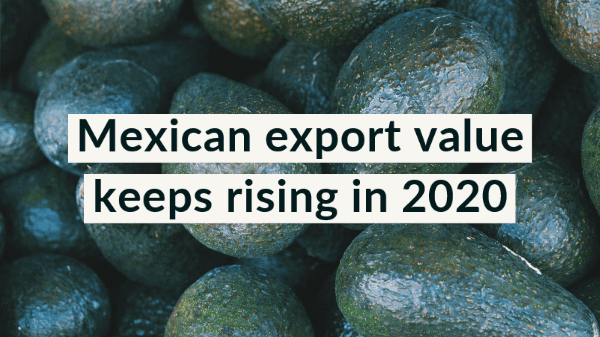 According to a study by the Consultative Group of Agricultural Markets (GCMA), which was based on data from the National Institute of Statistics and Geography (Inegi), avocado exports value was $1.132 billion from January to April, an increase of 3.4 percent over the $1.095 billion in the same period during 2019, as reported by La Jornada.

This rise occurred despite shipments from Mexico to other nations plummeting as a result of the COVID-19 pandemic and export volume of this fruit falling 11.8 percent from that period, from 507,000 to 448,000.

This has led to higher prices due to demand of the fruit increasing, despite the lower number of shipments. GCMA indicates that the prices of avocados have risen 8 percent during the first four months of the year, netting a 22 percent increase in income for producers.

According to the U.S. Census Bureau, the U.S. is the destination of 80 percent of all Mexican exports, with the first four months of the year totaling $103 billion in value of goods, an annual drop of 11.6 percent.

Mexico produces more than $2 billion worth of avocados, dominating the global avocado market.

Michoacán leads avocado production in Mexico, producing 50 percent of the fruit in the country, and it is the only Mexican state approved to export avocados to the U.S.