Broccoli prices are soaring as supplies tighten and consumer demand shows no signs of letting up.

There have been reports of lighter plantings in March in response to the pandemic, which could be reducing supplies, but weather in California has also been uncooperative so far in June.

Prices in mid-June are about double what they were a month ago from both California shipping regions and Mexico.

Through early June, broccoli had been a top 10 selling vegetable at retail, with weekly year-over-year sales increases ranging from 15 to 30 percent, but the higher F.O.B. pricing could cause a retail price spike, putting consumer demand to the test. 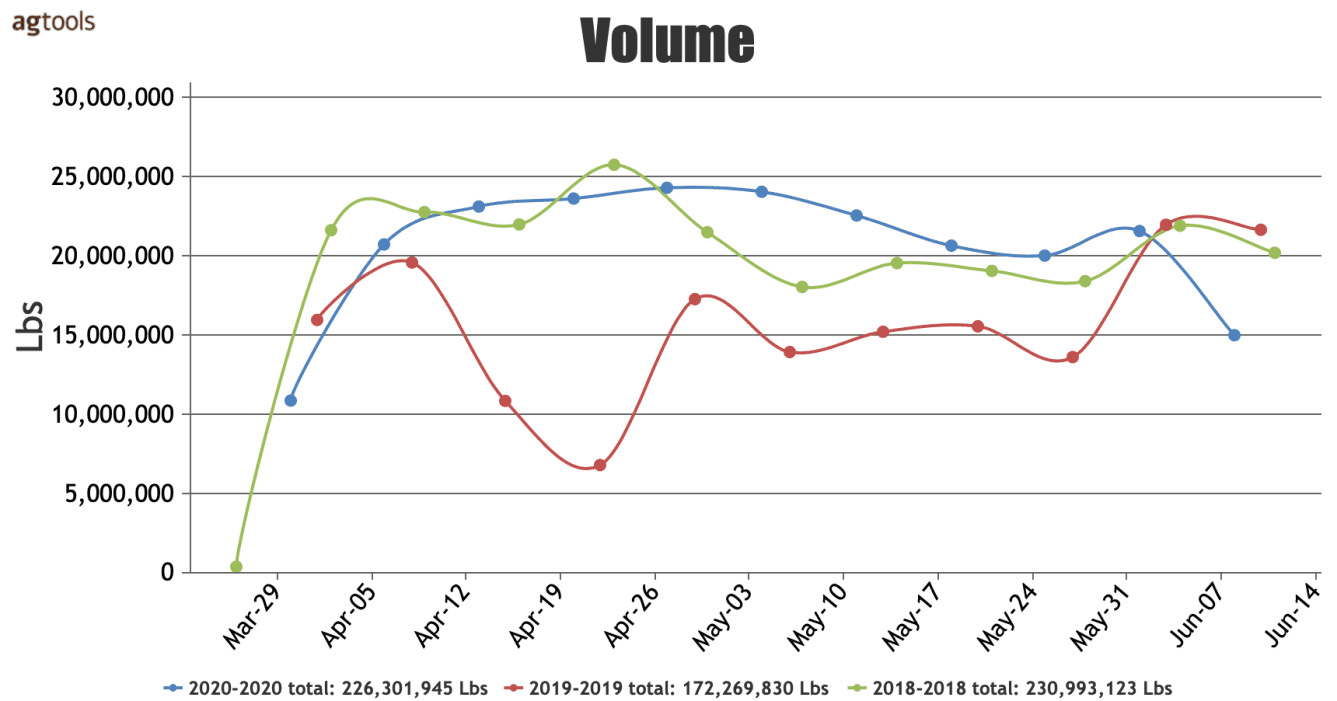 To observe a valid market trend, it was necessary to review the volumes in two regions, Central California and Mexico, and extend the period of analysis from the beginning of April 2020 through the first days of June, said Paola Ochoa, program manager for Agtools Inc.

The data shows that despite the fact that broccoli is highly perishable, consumers have continued to buy the vegetable during the pandemic. From the beginning of April through the middle of June volume is 31 percent higher than the same period last year.

F.O.B. pricing for broccoli was unremarkable between the beginning of April through the third week of May, at which time prices began to increase, Ochoa said. The price remained below that of 2018 and 2019 during the first three weeks of May, but then began to climb steadily.

The consistent price increase continued through the second week of June, and the Salinas product has reached a high of $30, a level not seen in any of the last three years.

The upward pricing trend is also seen for the Mexican broccoli in McAllen, which began at the end of May, Ochoa said. The increase trend has lasted through June 12, reaching a high of $19, higher than either of the last two years. Note that the price for Broccoli from Mexico remains on average $10 below the price of broccoli produced in California.

The upward pricing trend is evident for product originating on both regions. However, the rate of increase is more significant for the Salinas product, as can be seen in the graph below.

In the New York market, we observe terminal price increasing starting during the last days of May, a trend similar to that of F.O.B. prices, Ochoa said.

However, when comparing the current terminal price with those of previous years we see that prices in 2020 have not exceeded those of 2018 and 2019. In fact, pricing this year in the last week of May and the first days of June is below that of the same period for 2018. This year, on the last day of the analyzed period, we do see the price reach a level not seen during the last three years, she said. 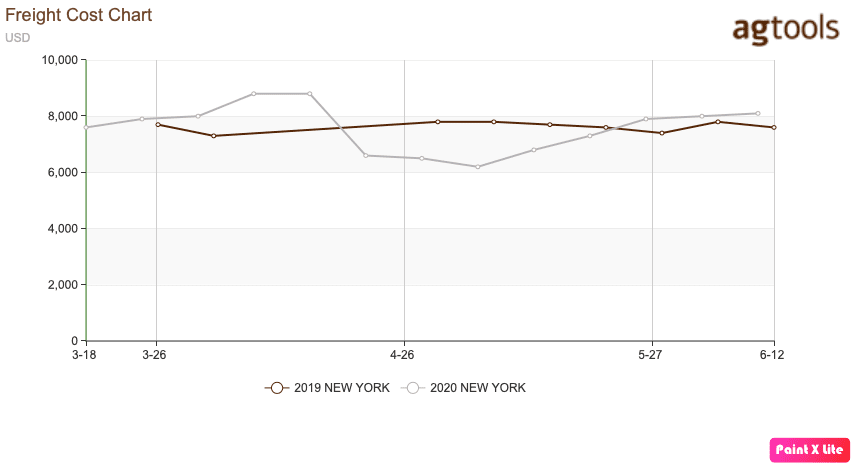 Freight cost on the Salinas – New York route has differed consistently since the middle of March through today when compared to the same period in 2019, Ochoa said.

During the analyzed period in 2019, pricing was very stable. In 2020 prices have been both higher and lower than in 2019 for the analyzed period. Freight prices for Salinas-New York have gone from a high of almost $9,000 in the middle of April, to a low of approximately $6,000 at the end of April.

The steady rise in freight cost during March was most likely a result of increased demand brought about by the abnormal shopping patterns of the Covid-19 crisis. Once demand began to decrease, freight pricing followed downward. Costs have rebounded steadily since the last days of April and as of June 11 have stabilized to a level similar to that of 2019.