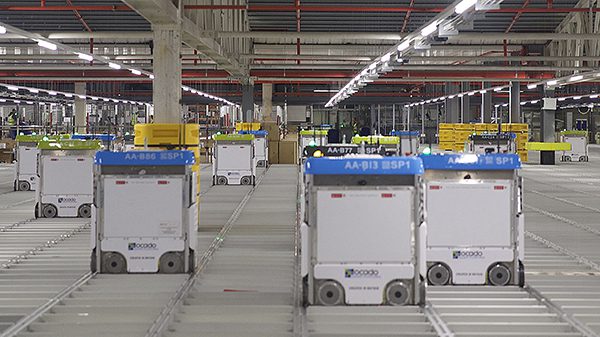 When it comes to its future-forward strategy, one of Cincinnati-based Kroger’s BB #:100073 highest profile alliances is with United Kingdom-based Ocado, to bring its stores and supply chain past the twenty-first century to deliver best-in-class service to its customers.

The first phase of the plan involves building 20 automated customer fulfillment centers across the United States to modernize and streamline operations.

Ocado, a technology company, was founded in 2000 and began trading on the London Stock Exchange in 2010. Its two main divisions are Ocado Retail Ltd. and Ocado Solutions.

It oversees Ocado.com, billed as the world’s largest dedicated online supermarket, with a 15 percent share of the United Kingdom’s online grocery market. The division also is home to the online pet store Fetch, and the new one-hour grocery service, Ocado Zoom.

The Ocado Solutions division offers its proprietary technology to other retailers around the world. In addition to Kroger, it counts Sobeys, BB #:116615 the big Canadian retailer, as a partner.

Ocado also has a presence in vertical farming, which it recently strengthened by forming a three-way joint venture with 80 Acres Farms and Priva Holding BV, calling the new entity Infinite Acres.

This is a multi-part feature adapted from the cover story of the March/April 2020 issue of Produce Blueprints.