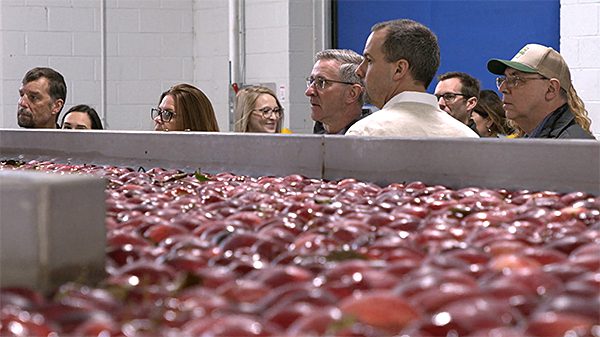 Andy Figart, president of Hess Bros. Fruit Co., leads a tour of the company’s facility in conjunction with a roundtable discussion of PASS, the Pennsylvania Agricultural Surplus System, which provides farmers funding to get food that would otherwise go to waste to vulnerable families who need it most. Governor Wolf requested a $1 million funding increase for the program in his 2020-21 budget proposal.

Hess Bros. Fruit Company, which has supplied more than 370,000 pounds of fresh fruit to the program, hosted the discussion among contributing growers as well as charitable food organizations and processors who are program partners.

“Agriculture is the antidote to hunger,” Secretary Redding said. “Pennsylvania farmers produce some of the best and most plentiful food in the world, but the extra food they produce isn’t always where hungry families are.  PASS gets that food where it is needed, while supporting the generosity of farmers like the Hess family.”

According to the USDA, in 2017, more than 1.53 million Pennsylvanians—that’s one in every eight people—don’t always know where their next meal is coming from.  “Our organization believes it is our greatest honor to help feed the world,” said Andy Figart, President of Hess Bros. “The PASS program helps us do that by ensuring that our growers are not being financially punished for their generosity.”