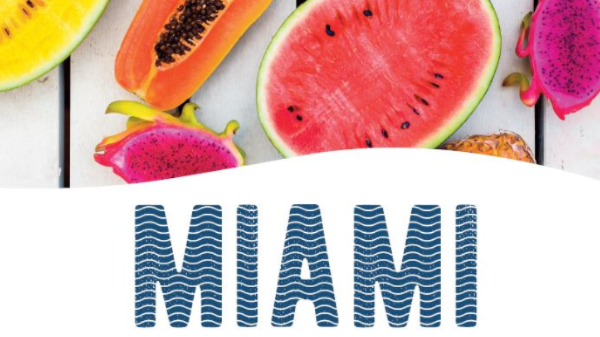 Despite the Miami region’s abundant production, the heart of South Florida’s fruit and vegetable industry revolves around trade with Latin America, the Caribbean, Asia, and Europe.

Three major ports serve the greater Miami area, including PortMiami, Port Everglades, and the Port of Palm Beach. Most of Miami’s produce businesses use all three ports to import and export fresh produce.

The closest U.S. port to Latin America and the Caribbean, PortMiami offers shorter shipping times. In 2018, more than $188 million in fruit, nuts, and vegetables moved through PortMiami, which has more USDA staff than any other port of entry in the nation.

A few years ago, PortMiami spent $1 billion on infrastructure improvements, including the Deep Dredge Project to increase channel depth. The port also added a new fast access tunnel and daily on-dock rail service to be ready for the biggest ships.

“The improvements have definitely been a boon to us as produce importers,” says Tulio Garcia, president of Miami Agro Import, Inc., BB #:160682 a family-owned, third-generation Guatemalan grower-shipper and importer.

“We now can expect to receive containers the same day they arrive to the port. Because of the tunnel, we now receive containers within half an hour from when it gates out of the terminal. They have also worked with the USDA at the terminal, so problems we may encounter can be resolved without a loss of product.”

Frank A. Ramos, president of The Perishable Specialist, Inc., BB #:168353 a Miami customs broker specializing in fruits and vegetables, praises the port’s completion and says the new tunnel has been the most beneficial improvement.

“The tunnel is a secondary entryway and exit into the port and it has been a blessing—alleviating the long lines that would start a bottleneck when we only had one entryway.”