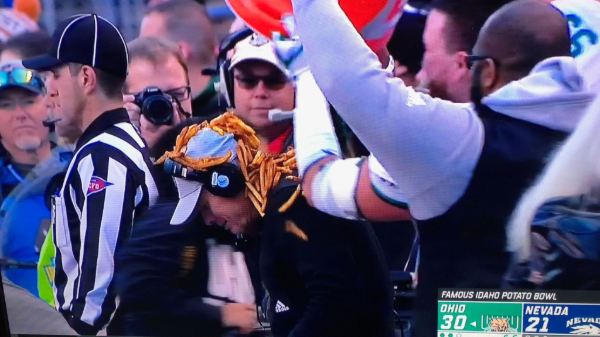 The potato’s connection to the football game wasn’t subtle, and that was the plan.

The Famous Idaho Potato Bowl, played January 3 in Boise between the Nevada Wolf Pack and Ohio Bobcats, ended up with Ohio winning 30-21. But anyone watching could easily say the real winner was the potato.

“No matter where the camera was, you saw Idaho Potatoes,” said Frank Muir, president of the Idaho Potato Commission, the title sponsor of the game. “There were two on the 25 (yard lines) and the giant one in the middle of the field.”

Muir said this was the first year the logo appeared at midfield after Boise State University agreed to allow the commission and ESPN to pay to remove and replace BSU’s logo.

My favorite part of the game was when the winning Ohio coach was about to receive the customary Gatorade shower from his players, the bucket was instead filled with French fries made from Idaho-grown potatoes.

Ohio coach Frank Solich even chomped a few fries on his way to the post-game handshakes.

“I told the local news, that after what happened today (with the fries in the bucket), all the coaches in America will demand fries instead of a cold drink bath, so they can have something to eat on their way off the fields,” Muir said.

He said for the investment of just less than $500,000, Potato Commission members get not only the exposure during the game, but before and after, and considering that ESPN owns the bowl and broadcasts it, the network isn’t shy promoting the tie-in.

“We get at least six TV ads during the game too,” Muir said.

It would be easy to make fun of the Idaho Potato Bowl being played at Albertson’s Field in Boise, but the connection in consumers’ minds is hard to beat.

“We have fun with it and poke fun at ourselves,” Muir said. “But the ‘common-taters’ on the game said, ‘Idaho potato’ hundreds of times.”

To the coaches and players, the game was serious. To ESPN and the Potato Commission, their investments are serious.

But to fans and viewers, it’s entertainment, and the game delivered that. And French fries.