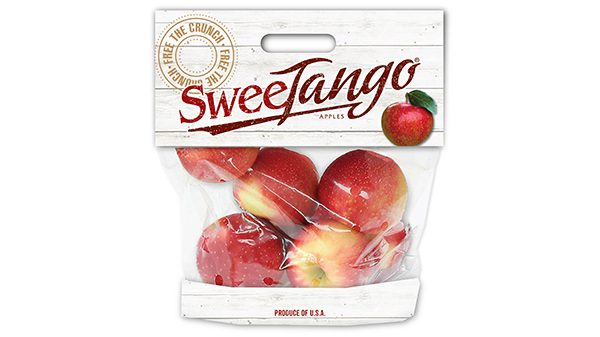 PRESS RELEASE: MINNEAPOLIS, Minn. – September 18, 2019 – SweeTango® apples will be in the spotlight on top-ranked podcasts this fall with an ad campaign that will reach listeners during the apple’s peak season between September – November.

SweeTango apple growers have partnered with nine podcasts that have listener followings who fit the demographic profile of current SweeTango shoppers, including an emphasis on Millennial and Gen Z listeners to develop those audiences as well. Podcast hosts will raise awareness about the apple’s incredibly loud crunch and delicious flavor, with its lively touch of citrus, honey, and spice. The hosts’ direct and personal endorsements will air before and in the midst of individual podcast episodes with topics that range from food and cooking, to pop culture and entertainment, to deep-dive interviews with notable public figures.

Jennifer Parkhill, executive director of Next Big Thing, the over 50-member grower cooperative that grows SweeTango, noted that “SweeTango is among the first produce items to conduct podcast advertising, and our 2018 campaign exceeded expectations. We reached 1.8 Million downloads across seven different podcasts, which was 20% above the original 1.5 Million forecasted. We found it to be a very effective way to drive sales by raising awareness about everyone’s favorite apple during its peak season of availability. We’re excited to build on the momentum we set last season.”

The 2019 SweeTango podcast campaign is projected to reach nearly 8 Million downloads by increasing the number of podcasts and investing in programs with larger listening audiences with superstar hosts like Oprah Winfrey, actor and comedian Marc Maron, and sportswriter and analyst Bill Simmons.

Podcasts featuring SweeTango ads in 2019 are:

Hosts will drive traffic to sweetango.com where listeners can reference a detailed map on the website to find a SweeTango retailer near them.

The campaign takes advantage of the steady rise in podcast listenership among SweeTango’s target audiences. According to Edison Research, 51% of all Americans now listen to podcasts, up from 44% in 2018. Midroll media research shows that 61% of listeners report buying something they heard about on a podcast ad, and 60% state that given equal price and quality, they prefer to buy products from companies that advertise on their favorite podcast.

Next Big Thing, A Growers’ Cooperative is a cooperative of more than 50 family growers, spread over five time zones from Nova Scotia to Washington state, that grows and markets managed varieties of apples, beginning with SweeTango. More information on SweeTango can be found at http://www.sweetango.com or on Facebook at http://www.facebook.com/sweetango.

SweeTango’s distinct taste, texture, and quality stem from careful breeding, expert horticultural practices, and meticulously selected growing locations.  Apple breeders at the University of Minnesota crossed the sweet Honeycrisp and the tangy Zestar! apple varieties to create SweeTango. Using a manual, painstaking process, research scientists cross-pollinated these parent apple varieties just like bees, birds, butterflies, wind, and rain do in nature.  A new variety of apple to many, the first crop of SweeTango reached grocery stores in the U.S. and Canada in 2009.