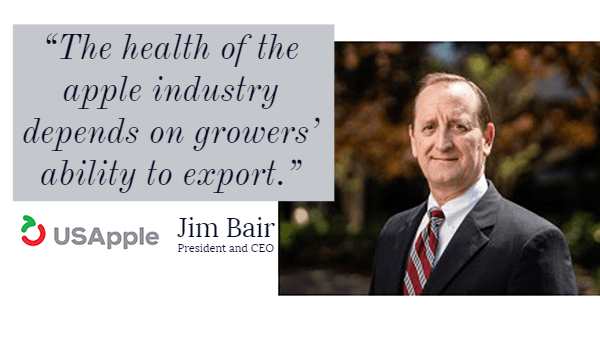 PRESS RELEASE: Washington, D.C. (Sept. 13, 2019)—USApple BB #:145473  President & CEO Jim Bair  spoke at a press conference in Washington, D.C., September 13 to urge Congress to pass the U.S.-Mexico-Canada trade agreement (USMCA). The event took place at the International Trade Center during the final stop of the Farmers for Free Trade motorcade tour, which has spanned 20,000 miles, 30 states and 100 stops, including many orchards and apple businesses. Farmers for Free Trade is a coalition of more than 1,000 agriculture organizations and companies working toward passage of the USMCA.

“Apple exports are expected to be one-third less than last year causing grower income to drop $588 million,” said Bair at the press conference. “If we don’t pass the USMCA, it signals we are surrendering our place in the global market. And there are many competitors willing to step in to take our place.”

As a replacement to the North American Free Trade Agreement (NAFTA), which benefited growers tremendously with quadrupled apple exports to Mexico, passage of the USMCA is critical for growers.

“Because of the success of NAFTA, growers have made huge investments in trees, land, equipment and infrastructure,” said Bair. “The health of the apple industry depends on growers’ ability to export.”

Growers export about $1 billion worth of apples annually, roughly one-third of the country’s crop. Mexico and Canada are the top export markets for the industry. While not all growers export, trade is critical to the future of the entire industry.  If those apples don’t find homes overseas they flood the domestic market, leading to supply issues that impact everyone’s bottom line.

“The USMCA has to get ratified,” said Bair. “A future without free trade across North America is a future too terrible to consider.”