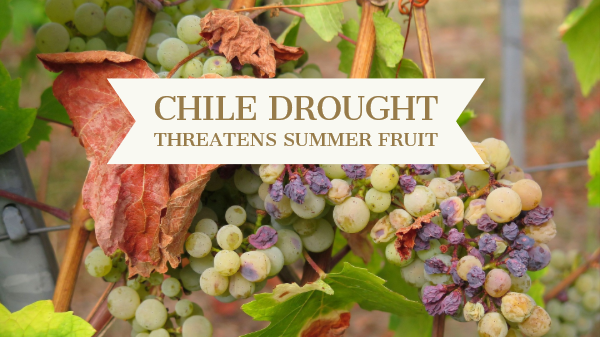 The drought in Chile continues, and it is now expected to affect more regions and more fruit.

Valenzuela said depending on the location and fruit, the affect could vary, but he believes later season fruit will be affected the most.

“I believe that early fruit, such as early cherries, will not be so badly affected, but we are still evaluating the situation to see the what will happen from January to March, when later fruits such as kiwi, apples, and grapes are harvested; these are the ones that will probably be affected the worst,” Valenzuela stated.

He also added that Chilean growers expect to see less productivity, since fruits are 80-85% water, and there will be a reduction in size due to the drought.

In speaking with Emol, Antonio Walker, the Minister of Agriculture, said growth in this sector would not see the same increases it has had in previous seasons.

Walker continues to say, “We have signed the decree that officially declares this agricultural emergency due to water scarcity. The region is experiencing a very complicated situation. We have a 75% precipitation deficit, one of the most complicated years of the last 60 years.”

Walker also delved into a plan where more than $5 billion will be invested in the infrastructure to ensure the supply of drinking water. He said the government is looking into other countries’ technologies such as Israel, Netherlands, and China, saying, “On this issue we have to be humble, we have to go out and find new technologies and learn, because there is so much to do.”

Walker calls on the country to be responsible with the resources they have, as the current season is long, and they still have spring and summer to come.