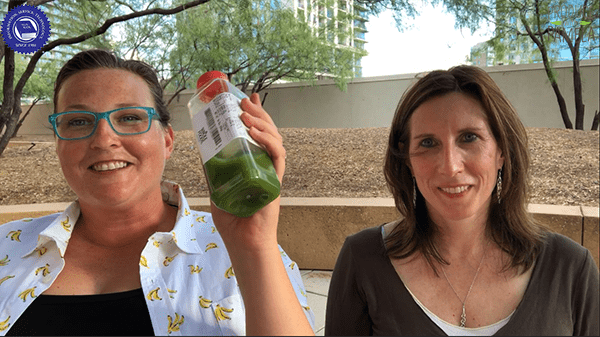 We crashed the rooftop seating area at Whole Foods to shoot the video, of course!

AUSTIN, TX—There’s nothing like touring grocery stores with a local.

Anne-Marie Roerink of 210 Analytics was in town to present the latest Power of Retail Foodservice report, but she managed to squeeze in some time to see some stores, so I went all out.

There are few places where you can see as much retail innovation as Austin. We’re close enough to San Antonio to have the best examples of what H-E-B has to offer, and our young, tech-savvy, and growing population means the retailers here to compete with H-E-B are bringing the best.

We managed to squeeze 10 stores in one afternoon, and to go along with Anne-Marie’s discussion about foodservice at retail, we chose to eat our meals at stores.

Our first stop was Fiesta Mart, which was recently acquired by El Super. This store was completely remodeled not too long ago, and is a great example of excellence in merchandising fresh produce for ethnic shoppers.

Next was H-E-B’s Mueller location, an urban store right in the heart of development, near the University of Texas. Anne-Marie and I both noticed the store went above and beyond in energy efficient fixtures, including doors on the meat case. The grab-and-go selection was extensive. We both grabbed some in-store poke bowls for lunch, along with the bakery’s excellent cherry pie.

Then, I dragged her way up north near where I live in the suburbs to the new H-Mart, which opened about a year and a half ago. H-Mart is a Korean mega grocery store based in Brooklyn, NY. This location occupies a former Sports Authority AND Bed, Bath and Beyond. It’s massive, but as Anne-Marie noted, very shoppable.

Just across the parking lot is a newly-remodeled Target store featuring the company’s new concept for less merchandise on the sales floor and more in-store fulfillment. The produce department’s much smaller than it used to be and includes way more snacks.

Our fifth stop was H-E-B Lakeline, a store I’ve been shopping ever since it opened. They test a lot of new concepts here, from cashier-less scanning to extended Meal Simple selections. I picked this one because Anne-Marie also writes the Power of Deli, and this store doesn’t have a hot bar. H-E-B recently demolished it (and took away the sweet tea and nugget ice, which made me very sad!) and replaced the entire set with multiple grab-and-go meals.

Next up was Walmart, which was my choice because I was looking for evidence of Produce 2.0. This store matches the ones in Cedar Park, with rampant out of stocks, unfortunately.

No. 7 was a quick check in at El Rancho Supermercado, where I love to go buy fajita meat and dried chiles for mole. This store has excellent fresh-cut as well.

No. 8 was a new 99 Ranch Market, which recently opened in north Austin in the site of a former hardware store. It’s got a wacky layout because of the space, but the produce department was large and well-laid out. They had TONS of packaged produce, and kiwifruit, of all things.

No. 9 was one that I’m sure Anne-Marie was impatient to see: Central Market Lamar. It’s the first Central Market and the best, in my opinion. It’s not fancy. It doesn’t have shiny bells and whistles. What it does have is massive street cred amongst the foodie community. If you want the best ingredients, you go to Central Market. Their merchandising just makes you want to buy everything.

Our tour ended at the Whole Foods corporate headquarters store in downtown Austin, where I saw the prettiest fresh-cut I’ve ever seen in my life. The colors even coordinated with the maroon refrigerated case. I’m not sure how they managed that.

This store changes constantly, and today was no different. They’ve relocated and reformatted the in-store food stations, taking out the massive pizza oven and replacing it with a more modest version. Instead, you find a series of tablets where you can place your order for any one of probably a dozen eateries.

We finished up with some soup from the Asian eatery up on the terrace – a great way to wrap up The Ultimate Austin Grocery Tour.