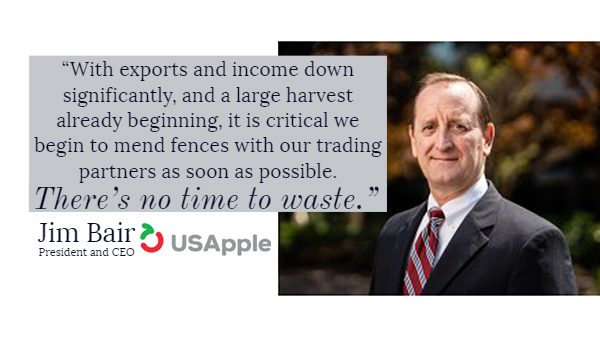 PRESS RELEASE: Falls Church, Va. (Aug. 28, 2019)—U.S. apple growers are bracing for another round of retaliatory tariffs from China, the U.S. Apple Association BB #:145473 said Aug. 28. The country has said it will begin unleashing new tariffs on a wide range of U.S. goods, including an additional 10 percent on apples for a total of 60 percent, beginning Sept. 1.

“Margins are already razor-thin or negative so this new round of retaliatory tariffs on apples only adds to grower uncertainty as we head into harvest,” said USApple President and CEO Jim Bair. “Growers are already feeling the loss of exports over the last year due to escalating tariffs. As the tariffs pile up, we’re watching what was an emerging market diminish.”

The U.S. apple industry finally achieved full—and reciprocal—access to the Chinese market in 2015, and in just three years it grew to be U.S. growers’ number six export market. Until the onset of trade tensions with the country in 2018, China was viewed as having significant growth potential for U.S. apples.

According to USApple, new data show overall apple exports for the 2018 crop were down 27 percent from the previous year. The value of apple exports fell by 22 percent, from $1.1 billion in 2017 to $854 million for the 2018 crop. Overall farmgate income is also down 16 percent, or $588 million, from 2017 to 2018. To help ease the loss, the Agriculture Department’s Trade Mitigation Program purchased $83 million of fresh apples this past year.

“According to USDA, the 2019 apple crop will be the ninth largest in history, reinforcing the need for access to top apple markets,” continued Bair. “With exports and income down significantly, and a large harvest already beginning, it is critical we begin to mend fences with our trading partners as soon as possible. There’s no time to waste.”