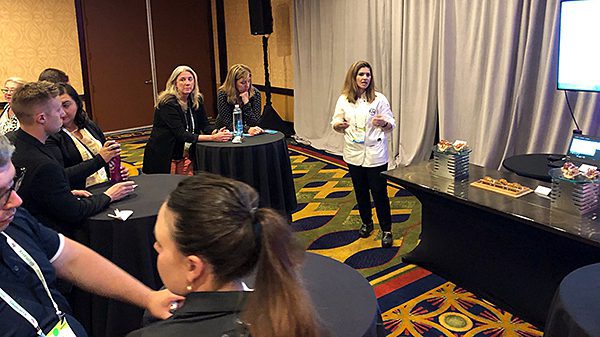 Jessica Foust, with Creative Food Solutions, says consumers 35 and under love food delivery and don’t want its quality to be any different than eating at the restaurant.

While the darling of the movement at the moment – the meatless burger trend – isn’t necessarily produce, the industry ought to have plenty of opportunities to seize its place in the eat-in or take-out meal.

He said by far the burger is the leading form in the meat analog trend, and now that the burger makers have finally found a way to make them taste good, the trend should grow.

Ben Lee said restaurants are starting to listen much more to Generation Z, as they start spending more money on food, and as of now, this age group loves “street food,” low-carb, gluten-free, plant-based, and they’re not afraid of fat, as long as it’s natural and not processed.

Fruits and vegetables that have been criticized in the past for high fat content shouldn’t have to overcome that burden now.

Jessica Foust said restaurant food delivery is booming and being driven by consumers 35 and under.

“Their expectation is that the taste and experience is the same as at the restaurant, which is a fairly unrealistic expectation,” she said, but they have it nonetheless.

That presents a challenge for some produce items. Chefs and operators have to choose fruits and vegetables that can hold up in the 30-60 minutes it can take to reach the customer.

She said an example is replacing shredded lettuce with shredded cabbage on tacos.