First made famous by author John Steinbeck in his evocative fiction, the Salinas Valley in Monterey County, CA is more than a highly productive growing region. It’s a laboratory for innovation and a harbinger for the future of agriculture in the state. 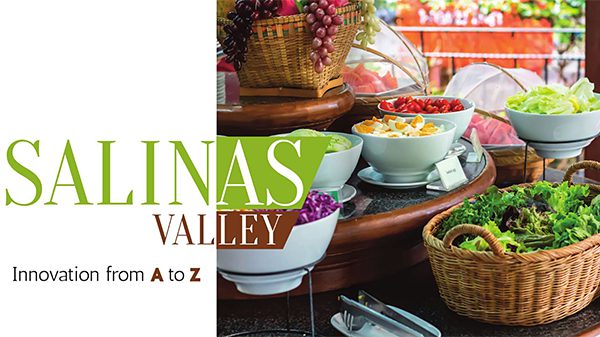 Though the Valley has long been heralded as America’s Salad Bowl, producing approximately 70 percent of the nation’s lettuce and leafy greens, its growers contribute so much more—as many as 150 varieties of fruits and vegetables—from artichokes to zucchini.

Salinas Valley enjoys rich organic topsoil that runs 100 feet deep. Unlike growing regions in the Southwest with sandy, mineral-rich soil and the Southeast, characterized by red clay, the Valley’s soil is spongy and moist, due to the three aquifers that feed it. Locals brag that only the Nile River Valley rivals Salinas in fertility.

Climate is usually kind to Salinas and its environs: hot, dry days and cool nights are tempered by ocean breezes from Monterey Bay so delicate greens and berries can thrive in the summer to fall months.

Growers have adjusted to variations in rainfall with technology to preserve water resources, including drip irrigation and specialized software to reduce usage by 15 percent over the last two decades. These natural gifts, along with ongoing commitments to advance the science of growing, keep Salinas at the forefront of agriculture.

Norm Groot, executive director of the Monterey County Farm Bureau says, “Over the past ten years, we’ve seen some expansion of the number of different (minor) crops. The major crops—leafy greens, vegetables and berries—have not changed much.”

What Groot considers the biggest expansion in crops over the last decade is in cane berries, as well as “more acres planted in vineyard production in areas previously not farmed, such as gentle slopes and rolling hills.”