A recent study showed that fruit and vegetable consumption has fallen 30% in the last 30 years in Mexico. 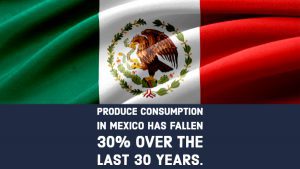 According to Elsy Garcia Villegas, a specialist in Health Sciences of the Faculty of Medicine (FM) of the National Autonomous University of Mexico (UNAM), the excessive burden and poor management of stress, the lack of planning a diet, and the sedentary habits fostered by technological development are some of the factors that have contributed to this.

Eduardo Abitia, from Rex Produce, Culiacan, Mexico, agrees, stating that he believes that there needs to be a better marketing campaign for consumption of local products, which are not only cheaper but also help local growers increase their business.

According to the study, Garcia Villegas stated that 72 out of every 100 young people in Mexico are overweight or obese, while in teenagers that figure is 4 out of 10. She adds that taking 10,000 steps a day is a step in the right direction to fight this public health problem.

Over time, Mexico has transitioned from having older markets where traditional fruit and vegetable-based foods were readily available for consumption to being replaced with modern plazas or self-service stores, further aiding in Mexico becoming one of the biggest consumers of soda and instant soups.

When asked if he agrees with the study’s findings on older markets and new plazas, Abitia said, “Yes, totally because in my personal experience I have lived it in my own flesh. You do not find near your house any small independent market that is not a large self-service chain, the entry of multinationals has made small businesses disappear notoriously.”

In 2017 Mexico was the United States’ 2nd largest supplier of goods. U.S. goods imports from Mexico totaled $314.3 billion in 2017, of that agricultural products accounted for $25 billion, and of that fresh fruit accounted for $6.0 billion and fresh vegetables accounted for $5.5 billion. With exports in the billions, the population must be indulging the its home-grown fruit and vegetables.