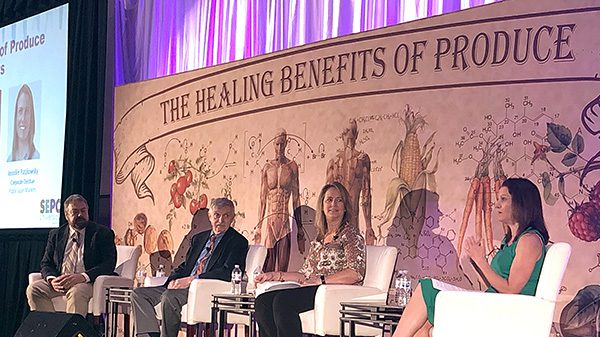 ORLANDO, FL – For years fresh produce marketers have operated on the principle that consumers know fruits and vegetables are good for them, but they don’t eat as much as they should because of taste, convenience or price.

What if consumers don’t know HOW beneficial fruits and vegetables are for them?

A panel at the Southeastern Produce Council’s Southern Exposure March 8 explored ways of telling consumers they should look at increasing their produce consumption for more reasons than they realize.

But marketing “food as medicine” ought to work if we focus on the short-term benefits.

“Some societies eat food that restores balance, including in the West,” he said. “There’s no reason to think there’s a distinction, and we can reverse some diseases through diet,” naming diabetes and colon cancer as examples of diseases that can be reduced quickly with an improved diet.

Two ways to reach consumers with these benefits were shown by panelists representing dietitians and health care.

Lee O’Donnell, corporate manager of prevention and wellness for Orlando Health, which employs 20,000 in 10 hospitals and associated facilities, said consumers need to get the message that a good diet leads to other healthy changes.

She said one challenge has always been that physicians only get about six weeks of nutrition training in all their years of medical education, but that’s improving.

Stress is a major threat to people’s health, she said, so she encourages consumers to keep healthier food, such as fresh fruits and vegetables, at home, within easy reach, instead of less healthy foods, such as those that are processed.

Much of Hebert’s research has involved food’s influence in reducing inflammation in the body, which leads to unhealthy growths, such as cancer, but also general soreness in joints and muscles.

A better diet leads to less inflammation, and he said he’s seen this in his own life, where he used to take pills for pain relief after exercise, but after changing his diet, he has no such problems anymore.

The idea of reducing inflammation is a good one, Patzkowsky said, but “there’s no consensus on what anti-inflammation foods are or what that diet is.”

Hebert said he’s worked on a Dietary Inflammation Index, which is essentially a way to measure how inflammatory a food item is to one’s body.

He said even cognitive decline is associated with high inflammatory foods. This is information that consumers need to know.

O’Donnell said produce marketers and retailers should stress to consumers that diet improvement can be incremental.

“If you choose poorly one meal, chose the better option next meal,” she said.

Moderator Chip Carter, publisher of the Southeast Produce Weekly, said he recently changed his diet after working with Hebert, and he’s lost weight and feels much better.

“It’s never too late to improve your eating and health,” he said.