The Food Safety Modernization Act (FSMA), enacted in 2011, was the most extensive reform of food safety laws in the United States in seven decades. 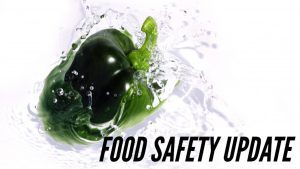 Its purpose, in part, is to help keep the nation’s food supply safe by shifting the focus from reaction after the fact to the prevention of contamination or adulteration in the first place through a series of new rules and protocols.

As a result, food safety directors for growers, packers, processors, wholesalers, and retailers have turned to a host of technology tools, like blockchain, to keep better records, track produce, monitor wash water, and identify and more quickly respond to any flaws in their food safety plans.

It’s probably no exaggeration to say the job of a food safety director is never done. Robert Holthouse knows what it’s like to be in charge of food safety on a farm. He led food safety for his family’s businesses, Holthouse Farms of Ohio, Inc. in Willard, and Doug Walcher Farms in North Fairfield, which grow bell peppers, cucumbers, and squash, and he’s a broker for other growers as well.

Like most others in the business of growing and selling perishables, Holthouse wore many hats. “Being food safety director was just one of my jobs,” he said, and it was among the most demanding.

“It was a nightmare to keep track of the paperwork,” he said, so he and his wife, Kate, a computer scientist, developed a software program, Sapphire, to make the process easier.

A logging tool, Sapphire allows users to enter data digitally, review it, and catch problems as they develop. It enables a real-time view of a food safety program. Previously, Holthouse monitored logs once a week and days could go by without him being aware of a problem.

“If there was something wrong, I wasn’t going to find it until the next Monday,” he said.

The digital log lets users set levels and track any number of data points, from raw product inspections and the strength of antimicrobial solutions to cooler temperatures and shipping or receiving logs. A smaller farm might track just three items while a large farm may have 10,000 entries a year.

Sapphire “won’t tell you how to create a food safety program,” Holthouse said, as it assumes users already have a platform. “It just streamlines and organizes the information.” In addition, the program is auditable because it prevents users from changing information once it has been saved. The information is time- and date-stamped, and if a change is needed it can be noted in the comments section.

One of the clients using Sapphire is E. Miedema & Sons, Inc., a fourth-generation, family-owned farm in Byron Center, MI. It grows about 1,600 acres of sweet corn, cabbage, winter squash, and zucchini for such wholesale customers as Walmart and Meijer.

Since it is required by both customers and FSMA to undergo third-party inspections, the grower uses PrimusLabs to conduct its audits. Another wrinkle for the farm is its seasonal labor force: employees shrink from about 120 in the summer to 10 in the winter, which presents challenges.

“Being seasonal, the food safety concerns can be a tricky thing to manage,” said Joel Miedema, secretary and treasurer of the family business, who not only coordinates food safety but also handles the farm’s accounting, human resources, and information technology needs, while also juggling his role as cabbage cultivator.

Miedema has used Sapphire for about four years for compliance and recordkeeping. The cost is based on usage, and runs under $1,000 a year. “It’s completely customizable to your operation, so it has been hugely helpful to us,” he said. “Auditors seem to appreciate it as well.”