In 2017, Mexican avocado production reached 753,589 metric tons, though this was down by 6 percent from the previous year due to bad weather. This disrupted the average year-to- year growth of 26 percent from 2012 to 2015, allowing for only a 2 percent increase for 2016. 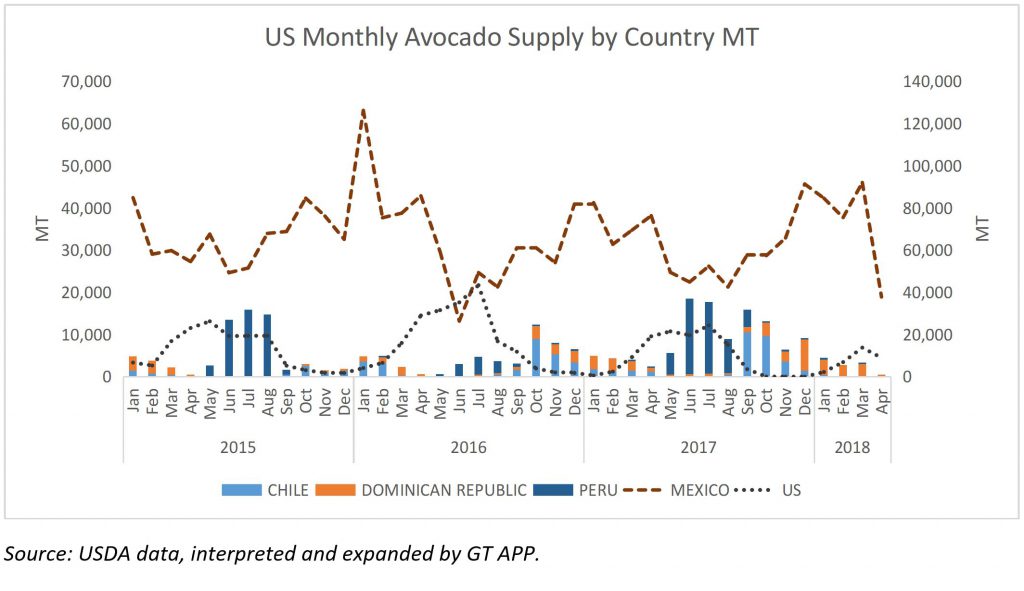 For the 2016-17 season, Mexico experienced an alternate-bearing low crop and hard winter rain that lowered volume, except in December. Despite weather issues, Mexican production still managed to show an average growth rate of 11 percent per month from January 2014 to April 2018.

The United States produced 116,538 metric tons of avocados in 2017, representing 12 percent of total market supply. Unfortunately, this level has fallen, not so much due to rising Mexican production but to local drought conditions in California. For comparison purposes, in 2015 domestic production accounted for 25 percent of all avocados sold in the United States, and in 2012 this figure was even higher, at 32 percent.

Domestic production for 2017 was comprised of 87 percent Hass varieties from Southern California, and 13 percent from Florida producers of other green-skinned varieties.

Golden State production requires 74.1 gallons of water to produce 1 pound of fruit, while the global average of water usage per pound of avocados is markedly different at 28 gallons, although it varies by country: for example, Mexico is 31.9 gallons and Chile 96.8 gallons.