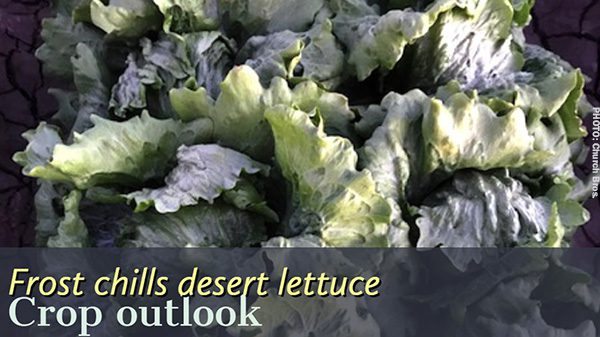 Despite some early morning frost in the Yuma, AZ, and Coachella and Imperial Valleys, celery and lettuce shippers report strong quality and project higher volume the last week of January.

Art Barrientos, vice president of harvesting for Ocean Mist Farms, Castroville, CA, said the company’s lettuce and vegetable supplies in the desert area have been strong and project to better the next few weeks.

“We’ve gotten some early morning frost, so some peeling on lettuce,” he said Jan. 22. “But we should be clean by next week.”

He said the Oxnard area, which is heavy on celery this time of year, have been dealing with rain issues.

“The last two weeks we’ve seen more than 6 inches of rain,” Barrientos said. “That has impacted quality and condition. Yields will be off, and volume, if was producing 1,400 cartons per acre will go to 1,000. That difference can impact the market.”

“Due to the rain event that hit the Oxnard area, some of our machinery has been sidelined but is expected to be back in fields Thursday,” he said Jan. 23.

He said the company’s desert lettuce deal has also seen some cold weather.

“We are currently experiencing cooler-than-normal temperatures in certain parts of the Yuma region causing some blister and fringe burn to the outer leaves and even had a bit of rain over the last few days,” Goldfield said. “However no impact to supplies is expected.”

According to USDA’s Agricultural Marketing Service, Jan. 23 celery prices were $32-36 per carton from Coachella, CA, Oxnard, CA, and the Imperial Valley. Prices have been on a steady rise from around $20 per carton at the beginning of the month.

AMS reported iceberg lettuce prices as $10-14 per carton from the Imperial Valley and Coachella Jan. 23. Prices were slightly lower at $9-13 from the Yuma, AZ, area. These prices are about half what they were earlier in January.