No one can dispute Mexico’s pivotal role in the North American produce scene, but in recent years countries across Central and South America have been working to compete for the palates and wallets of hungry Americans and Canadians — and they’re succeeding.

According to the U.S. Department of Agriculture, vegetable imports rang in at $12.7 billion in 2017, averaging annual growth of 6.3 percent since 2007. Fruit imports, worth $18.4 billion in 2017, grew even faster at an average of 8.3 percent during the same time period. 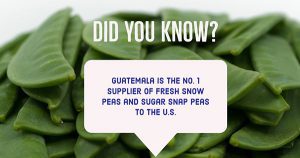 For a longer snapshot, from 1975 to 2016 the amount of imported produce grew by double digits — the percentage of imported fruit soared to 53 percent and vegetables climbed to 31 percent for the period.

This growth shows no signs of slowing down. Guatemala is now the biggest supplier in Central America of produce to the United States and the fifth-largest provider overall. Among its top products are cantaloupe, green beans, French beans, watermelon, and papaya.

Guatemala is also the U.S.’s No.1 supplier of snow peas and sugar snap beans. Ecuador is among the biggest suppliers of broccoli, second only to Mexico, and the primary source of all those bananas we slice up for cereal, although Honduras and Guatemala are also prolific banana and plantain growers.