Soaring in popularity are Peruvian avocados, which were first imported to the United States during the summer months back in 2012.

Xavier Equihua, president and CEO of Avocados from Peru, says the country has now become the second-largest supplier of avocados to the U.S. market after Mexico. It is also the No.1 supplier in Europe and in Latin America, and No.2 provider to Asia. 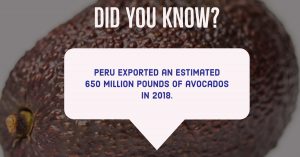 As far as the U.S. market is concerned, Peru is a seasonal supplier. Mexico, on the other hand, produces pretty much all year. In 2018, Peru is projected to export 650 million pounds of avocados, of which 150 to 200 million will go to the United States.

“That’s where we play a complementary role,” Equihua says. “The beauty of Peruvian avocados is that they’re in the market when consumption is at its highest, and production from Mexico is at its lowest. And California has the bulk of its production in the spring and early summer.”

This is particularly advantageous for Peru, given that avocados are among the trendiest items on the food scene today. From guacamole to avocado toast, everyone is plugging the benefits of avocados.

Where once they were available mostly in high-end supermarkets or specialty stores, the bumpy green fruit is now a top seller in every type of grocer across the United States and Canada from Walmart, Costco, H-E-B, Publix, and Kroger to Metro, Sobeys, and Loblaw banners. Avocados truly are everywhere.

“It is without a doubt the fruit of a new generation,” Equihua says. “Millennials are more vegetarian and vegan, and less interested in meat.”

With chefs and foodservice providers get more and more creative, avocados are finding their way into many snacks and meals morning, noon, and night.

According to Colescott at Southern Specialties, Peru’s high-volume industry also has to do with the country’s willingness to innovate and adapt. This dedication to future growth tending to current crops as well as adding acreage of new and promising crops like citrus varieties and pomegranates.