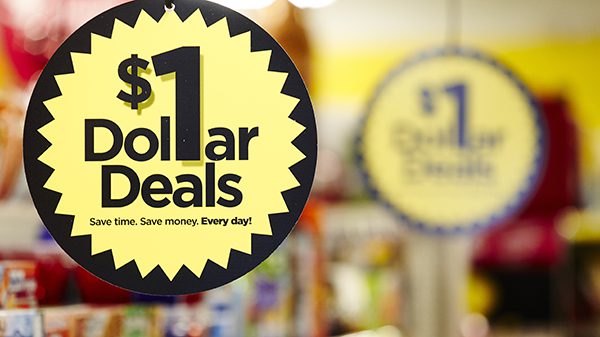 A story made the rounds a few weeks ago about a study that showed dollar stores sell more food to Americans than Whole Foods.

That’s some tasty clickbait, and I saw it shared and re-shared, as if this phenomenon is a bad thing. What’s unexpected about consumers buying food at an affordable price versus a high end, niche retailer that’s been trying to shake off a “Whole Paycheck” nickname for years?

Omitting the sheer numbers of the equation – the fact that there are fewer than 500 Whole Foods stores compared to MORE THAN 15,000 Dollar General stores –  this reeks of elitism and privilege and ignores the challenges consumers – and grocers – face in this country.

Goodlettsville, TN-based Dollar General Corporation, with more than 15,200 stores in 44 states, reaches more small towns in the U.S. than just about any other retailer out there, and they’ve spent the past few years remodeling stores to accommodate more fresh foods, including produce.

While I have reservations about how this retailer’s barebones labor model can handle fresh produce in the long run, they’re clearly pleasing customers with the additions.

CEO Todd Vasos reinforced performance of stores with fresh produce added to the mix during the company’s most recent quarterly earnings call in mid-December. Of the 925 store remodels the company had completed by the third quarter of 2018, 359 were converted to Dollar General Traditional Plus (DGTP) stores, with an expanded cooler.

A small fresh produce section was added to 107 of those stores.

What’s not so great?

The Institute for Local Self-Reliance, which published the Whole Foods and Dollar Store comparison, says the big chain hard discounters like Dollar General, Dollar Tree and Family Dollar, are taking business away from local grocers. I’ve seen independent grocer forums talking about the challenges they face when it comes to competing with the buying power of giants like Walmart and Dollar General, particularly in center store goods.

This is definitely a challenge for smaller grocers competing against a juggernaut like Dollar General, which has its eye on 25,000 or even 30,000 stores in the next 10 years.

Dollar General isn’t the only deep discounter taking a hard look at fresh foods. Commerce, CA-based 99 Cents Only was recognized by Fortune Magazine on its annual “Change the World” list, particularly for its expansion of healthful food options to underserved neighborhoods.

99 Cents Only has just under 400 stores in California, Texas, Arizona and Nevada. The retailer has been working to increase availability of fresh produce across its banner over the past few years, including organic produce.

Retailers wouldn’t be doing this if it wasn’t profitable. Food deserts can be a tricky issue to debate because it is often a chicken-and-egg situation.

If there was sufficient demand for fresh food, someone would be selling it.