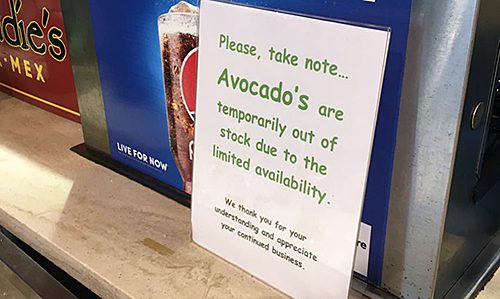 This sign appeared at a restaurant at the Austin Bergstrom International Airport in 2016. Expect more of them over the next month as Mexican avocado supplies rebound from a producer strike.

Don’t expect the avocado market to return to normal for another month, as Mexican avocado growers have just begun harvesting again after a strike over floor pricing affected supplies in mid-November.

That means consumers will have a hard time finding Mexican avocados at grocery stores and even harder at restaurants.

Because foodservice deals more in ripe avocados, the delay will be longer there, said Mark Shaw, vice president of operations for Markon Cooperative, Salinas, CA.

“We need ripe fruit in foodservice,” he said Nov. 14. “The strike is settled, so it will start flowing again and moving to ripening centers this weekend.”

But Shaw predicted the market will not see plentiful supplies like it had in October until the week of Dec. 10.

The Association of Mexican Avocado Producers and Packaging Exporters (APEAM) announced Nov. 14 that growers have begun harvesting and packing again after a 16-day stoppage.

Some restaurants have begun posting signs, telling consumers that they don’t have avocadoes due to the stoppage.

“From now to mid-December, consumers will find many restaurants where there won’t be avocados for them,” Shaw said.

On Nov. 14, USDA’s Agricultural Marketing Service only listed a few terminal markets with Mexican hass avocados, and prices were in the $80 per carton range. Just a week earlier, many markets offered Mexican hass for $35-50, depending on size, but in just a week, much of the pipeline has been cleared out.

Shaw said by Nov. 26, broadline distributors will be able to supply some of their customers, but having plentiful, ripe fruit will be another couple weeks.