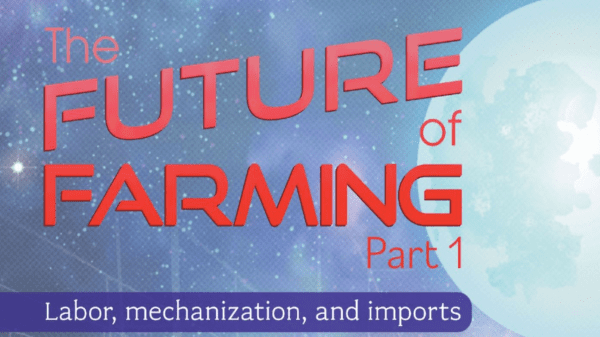 As a result of labor pressures, California growers are being “forced to look for alternates in automation and mechanization,” says Ian LeMay, president of the California Fresh Fruit Association in Fresno, CA.

“We’re not looking for full-fledged replacement, but incremental efficiencies throughout our farming practices,” he explains. “A 5 percent increase in efficiency can make a world of difference.”

Philip Martin, a professor at the University of California at Davis, who is the nation’s leading expert on farm labor, has a viewpoint that encompasses a larger perspective.

He provides an example of tall and round three-dimensional fruit trees being replaced by two-dimensional dwarf trees, whose limbs are trained to grow on wires and create fruiting walls.

These changes, he says, would then make it easier for machines to identify ripe fruit and reduce the distance fruit falls after being shaken from tree limbs into catching devices.

And this may not be far from reality.

Gary Wishnatzki of Wish Farms, Inc., BB #:111764 based in Plant City, FL, is also cofounder of technology company called Harvest CROO, which has developed a prototype robotic strawberry harvester that he believes is now ready for commercial production.

Martin also sees an extension of current mechanization in use with grapes. Similar to berries, he says, “robots that carry table grapes from pickers to packers at the end of rows could carry the grapes to packing sheds, where technology could pack them faster.”

For his part, LeMay doesn’t believe this will happen soon, even within the next three to five years. “I don’t see a fully automated system going through a tree fruit or table grape orchard,” he says.

For another angle on mechanization, The Economist ran an article this summer contending that the produce commodity most eligible for mechanical harvesting is asparagus, because its single sprouts are easy to manage.

An experimental harvester for the crop, called Sprout, has been developed by a London startup called Muddy Machines. This season it was tested by John Chinn, Britain’s largest asparagus grower, who called its prospects “fantastic.”

We may be hearing more about Muddy Machines, which has recently received £1.5 million in seed money to continue development of robotic harvesters.

But what does this matter to the vanishing American asparagus grower?

The industry is now dominated by imports from Peru, Mexico, and Canada, which account for 80 to 90 percent of the vegetable consumed in America. Asparagus acreage in the United States is a third of what it was fifteen years ago.

Indeed, observes Ashley Nickle of Ashley Nickle Growth Strategies LLC, a marketing firm focused on the produce industry who has worked with clients in California asparagus, state growers have survived by focusing on specialty restaurants that feature locally grown produce.

“It really is a differentiated product,” she says. In California, asparagus is a seasonal crop (mid-March to mid-May). “Chefs at Michelin star-rated restaurants put it on their dishes at this time of year.”

This is an excerpt from the cover story in the November/December 2022 issue of Produce Blueprints Magazine. Click here to read the whole issue.