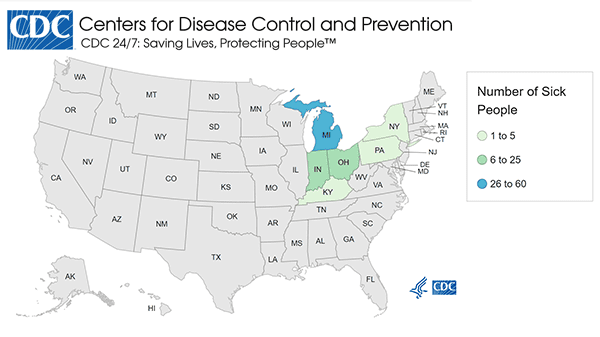 October 4, 2022 – CDC, public health and regulatory officials in several states, the U.S. Food and Drug Administration (FDA), and the U.S. Department of Agriculture’s Food Safety and Inspection Service (USDA-FSIS) investigated a multistate outbreak of E. coli O157:H7 infections but were unable to confirm the food source.

Sick people ranged in age from 1 to 94 years, with a median age of 22 years, and 55% were male. Of 97 people with information available, 52 were hospitalized and 13 developed hemolytic uremic syndrome, a serious condition that can cause kidney failure. No deaths were reported.

The true number of sick people in this outbreak is likely much higher than the number reported, and the outbreak may not have been limited to the states with known illnesses. This is because many people recover without medical care and are not tested for E. coli.

State and local public health officials interviewed people about the foods they ate in the week before they got sick. Among 82 people with detailed food history, 68 (83%) reported eating at a Wendy’s restaurant in the week before their illness started. The Wendy’s restaurants where sick people ate were in Indiana, Kentucky, Michigan, New Jersey, Ohio, and Pennsylvania. People reported eating a variety of menu items, including burgers and sandwiches. Of 68 people with detailed information about what they ate at Wendy’s, 46 (68%) reported eating romaine lettuce served on burgers and sandwiches.

Public health investigators used the PulseNet system to identify illnesses that were part of this outbreak. CDC PulseNet manages a national database of DNA fingerprints of bacteria that cause foodborne illnesses. DNA fingerprinting is performed on bacteria using a method called whole genome sequencing (WGS).

WGS showed that bacteria from sick people’s samples were closely related genetically. This suggests that people got sick from eating the same food.

Several food items were tested during the outbreak investigation, but the outbreak strain was not identified.

WGS analysis of bacteria from 108 people’s samples predicted resistance to chloramphenicol, streptomycin, sulfisoxazole, tetracycline, and trimethoprim-sulfamethoxazole; analysis of bacteria from one person’s sample did not predict resistance to any antibiotics. Standard antimicrobial resistance testing of clinical isolates by CDC’s National Antimicrobial Resistance Monitoring System (NARMS) laboratory is currently underway. These findings do not affect treatment guidance since antibiotics are not recommended for people with E. coli O157:H7 infections.

On August 19, 2022, Wendy’s took the precautionary measure of removing the romaine lettuce being used in burgers and sandwiches at restaurants in states where sick people ate.

During the outbreak, CDC provided updates and advised people to call their healthcare provider right away if they had severe E. coli symptoms.