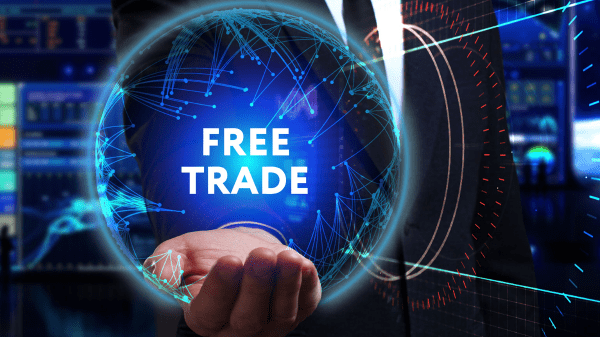 The Biden administration and its predecessor are more marked by contrasts than resemblances, but in one important area, their policies have been remarkably consistent: foreign trade.

In the future, the past five years may be seen as a transition point between the free-trade policies embraced by presidential administrations from George H.W. Bush to Barack Obama and a more rigorous approach.

One promoter of the latter is U.S. trade representative Katherine Tai, who has argued that the free-trade ideal has created too many imbalances, left too many behind, and produced too many unnecessary risks.

Commenting on Tai’s views, Stephen Olson of Hinrich Foundation, an organization promoting “sustainable global trade,” writes, “Worse yet, the headlong pursuit of free trade has led to some countries seeking to benefit by actively engaging in a race to the bottom on labor and environmental standards, further exacerbating problems that the trade-opening agreements have been powerless to remedy.”

“We need to turn the page on the old playbook,” says Tai.

Tai advocates “bringing a new and relevant energy to the way that we are doing trade, to thinking about trade and trade relationships, and these [trade] organizations, as not just instruments for liberalizing trade.”

One particularly prominent trade issue in the produce world is apples. The U.S. industry is chagrined by the 70 percent tariff placed by India on U.S. apples.

Although India imposes a 50 percent tariff on all imported apples, the additional 20 percent is in retaliation for U.S. restrictions on Indian steel and aluminum imports placed in 2018.

The U.S. apple industry exports about one third of its crop—$1 billion in value—annually.

India was one of the fastest growing markets before the tariffs.

(For a discussion of protectionism in India, see here.)

1. U.S. trade policy will not be conducted on a stand-alone basis to the same extent it has in the past. Instead, trade policy will be woven together more tightly with foreign policy, industrial policy, technology policy, environmental policy, and domestic social policy, including issues like gender equality and inclusivity. . . . Aside from any possible merits, it will complicate trade relations immensely and potentially even dissuade some countries from engaging more deeply with the U.S. on trade.

2. The United States will not reenter the Comprehensive and Progressive Agreement for Trans-Pacific Partnership (CPTPP) without significant modifications to the agreement, which would include labor and environmental provisions.

3. There is nothing in Tai’s vision for trade that should generate optimism about a dramatic improvement in trade relations with China,” Olson adds. In short, expect a continuation of the status quo.

Completely free trade across nations could never be fully implemented in practice, but it served as an ideal toward which the world was supposed to strive.

Although the developing U.S. approach may complicate thinking about free trade, these complications may correspond more closely to realities.