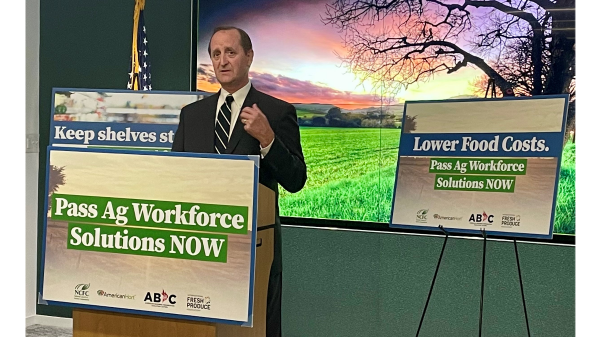 His statement is below.

“Agriculture labor reform has been our top legislative priority for more than a decade. It’s the issue that keeps apple growers awake at night, whether they employ 500 workers or five. An entire year of care and input costs can be lost when it’s time to harvest and workers arrive late or not at all.

“Increasingly, apple growers are turning to the H-2A guestworker program, and today, apples are probably the largest single commodity user of the program. But workers are often delayed due to administrative red tape and the costs associated with the program have outpaced inflation for decades.

“The reforms in the House-passed Farm Workforce Modernization Act would bring the needed stability and predictability to the agriculture labor market as a whole and specifically to the H-2A program. Growers would know what their labor costs are for the year and could plan accordingly, instead of scrambling when they learn at the last minute the H-2A wage rate is increasing by 10% or more.

“Congressman Newhouse, who spoke earlier, represents the largest apple district in the country, and we are so grateful that he has put his shoulder to the wheel to work toward getting this important legislation across the finish line, not once, but twice. Representative Simpson, who is also here, has been a great leader, as well as those who on a bipartisan basis supported this effort.

“Attention must now turn to the Senate. I want to acknowledge and thank Senators Mike Bennett and Mike Crapo for their willingness to take on this critical issue. We implore the Senate leadership to put politics aside for the sake of food security and the economic viability of our rural communities.

“The past few years have created a perfect storm as growers’ input costs such as fuel, fertilizer and freight have risen as much as 300 percent, while lost export markets have left apples to overhang the market and make the strain even greater. Apple growers are making tough decisions to determine if they can hang to continue producing America’s favorite fruit for another year, or if what has been a livelihood for three, four or more generations stops with them.”