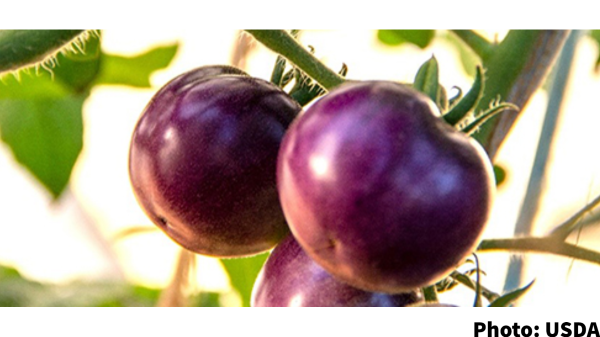 The world of genetically modified (GMO) crops is starting to see some major shifts.

Not necessarily technically, but politically and sociologically.

In the United States, USDA recently granted approval for the sale of a new GMO purple tomato that contains high levels of anthocyanins, which are found in berries and other fruit and, according to some evidence, help ward off cancer.

“The tomato was modified to alter its color and enhance its nutritional quality,” notes a press release from USDA’s Animal and Plant Health Inspection Service (APHIS). “We found the plant is unlikely to pose an increased plant pest risk compared to other cultivated tomatoes and is not subject to regulation under 7 CFR part 340. That means, from a plant pest risk perspective, this plant may be safely grown and used in breeding in the United States.”

The new tomato reflects a shift in GMO production: from breeding plants for pest resistance and other characteristics that appeal to growers to breeding them for consumer appeal, notes an article in Wired.

Norfolk Plant Sciences, a biotech research company that developed the plant, plans to introduce a purple cherry tomato in a handful of test markets in 2023. The firm is also working on purple tomato juice, sun-dried tomatoes, and beefsteak tomatoes. It also hopes to sell seeds to backyard gardeners.

Europe is also seeing some developments in the GMO world. Its summer of drought is causing some leaders to rethink the long-standing opposition of the European Union (EU) to GMO crops as a result of severe hits to yields. Current estimates indicate that corn production this year will be 12 percent below the five-year average for sunflowers and 16 percent below average for corn.

GMOs are well established among the large commodity crops in the U.S., accounting for nearly 90 percent of corn and soybean yield, while GMO fruits and vegetables, like the new purple tomato and a gene-edited mushroom approved in 2016 are much less in evidence.

In Europe, on the other hand, fruits and vegetables may be the first crops to see GMO development.

“If gene-edited crops do become deregulated in the EU, then it’s likely that the first to come to market will be fruits and vegetables rather than big commodity crops, as many of these already have GMO versions and manufacturers might be unwilling to create new gene-edited varieties for just the European market. Big agricultural companies have tended to avoid modifying lower-value foods such as fruit and vegetables because of the large costs associated with developing new GMO varieties—but gene editing is much cheaper.”

Opponents of GMO have portrayed it as meddling with natural processes of evolution, overlooking possible negative ramifications.

Advocates of GMO insist that it is merely an accelerated process of natural plant breeding. They also say that GMO foods are identical to conventionally developed crops in nutrition value and health effects.