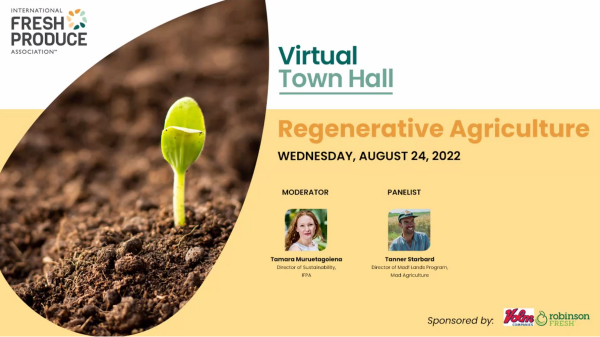 Most people in the produce industry have heard the term “regenerative agriculture,” just as they’ve heard of sustainable and organic agriculture.

But the difference between all these is not always clear.

On August 24, the International Fresh Produce Association BB #:378962 held a Virtual Town Hall about regenerative agriculture, as explained by Tanner Starbard, director of farm planning for Mad! Agriculture, a four-year-old company, based in Boulder, CO, and dedicated to helping farmers apply regenerative practices to their operations.

As its name suggests, regenerative farming is not merely about sustainability: it is about restoring farmland to a state of health that may have been reduced by conventional practices.

Regenerative agriculture is not the same as organic agriculture, since it does not automatically rule out the judicious use of chemical pesticides. Starbard says that although his company tends to work with organic growers, they “may not want to go all the way to an organic standard.” He also points out that some “might even be organic-compliant without having to go through the certification system.”

The “nexus” of regenerative agriculture, according to Starbard, is soil health, which is both the product of the plants and animals that have been in a place and the way to create more plants.

Regenerative farming cannot change a soil type: “you’re not going to change a sandy soil to a clay-loam soil.” Instead, it is a matter of making sure that the soil is healthy.

Soil structure—the extent to which it holds together—is one crucial element.

Tillage, although necessary in some circumstances, tends to destroy soil structure, so part of this program reduces tillage as much as possible. Tilth is a “short-term benefit” of tillage, he notes, though “in the long term, soil tends to compact.”

The long-term goal is to reduce “the depth and frequency of tillage”—including limiting it to “two or three inches of the top level of the soil profile” so as to preserve soil structure at deeper levels.

Biodiversity is another major theme for both “working and nonworking areas” of a farm, Starbard notes. Possible strategies include planning an “intentional pollinator habitat.”

Starbard devoted some attention to regenerative agriculture as it relates to the produce industry.

Obviously crop rotation will not be possible for permanent crops, but he notes that he has worked with avocado growers who have “a lot of success growing both annual and perennial cover crops” as a means of “increasing pollination, fertilizing, and reducing other pests.” Another benefit is “not needing to spray or mow between rows.”

Another consideration is the “distribution of plants at multiple levels of height,” although, Starbard points out, “hopefully the canopy is going to cover practically all of the field.”

Unusually for commercial agriculture, regenerative agriculture includes an aesthetic element. Starbard likens it to terroir in viticulture: “How does the wine express the beauty of the place?” He urges growers to “find the terroir of their place. How can the crops grown be expressive and healing of that location?”

At the center, Starbard emphasizes, is the grower as a human being. Part of the program is to enable growers to spend more time with family and having less stress over their operations.

In that sense, regenerative agriculture is as much about the people as the land.