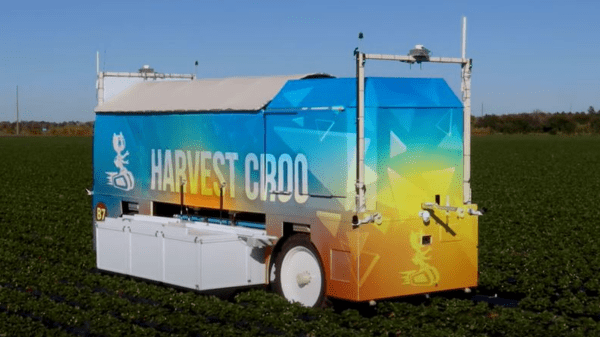 The market for agricultural robots is booming worldwide, according to a recent report issued by the London-based market research firm Brand Essence.

Harvesting, including fruit picking, is currently the most common application of robots in agriculture.

“Other horticultural tasks that robots can perform include trimming, weeding, spraying, and monitoring,” says the report.

“North America is anticipated to dominate the global agriculture robots market,” the report adds, “due to the high labor cost, increasing technological advancements, early adoption of advanced technology in the field of agriculture and presence of key players in this region.”

The report goes on to note that “robots have a number of advantages for the agricultural industry, including improved fresh agriculture quality, lower production costs, and a reduction in the demand for manual labor. They can also be used to automate manual activities like weed or bracken spraying, where using tractors or other manned vehicles would be too unsafe for the workers.”

Labor shortages are the chief motivator for advancing agricultural robotics. The United States is not alone here. Farm labor shortages in France were estimated at 200,000 workers between April and June, the report said.

Increased use of ag robots is projected for the Asia Pacific nations, partly because of government stimulus programs in nations such as Japan and South Korea: the latter has doubled its number of farm robots since 2018.

In 2021, XAG Japan introduced its R150 autonomous “to assist farmers in alleviating physical strain.” (Japan has the highest average age of all world nations.) In April, the company held a field trial using the machine for apple pollination.

Key players in the agricultural robot market, according to the report, are: