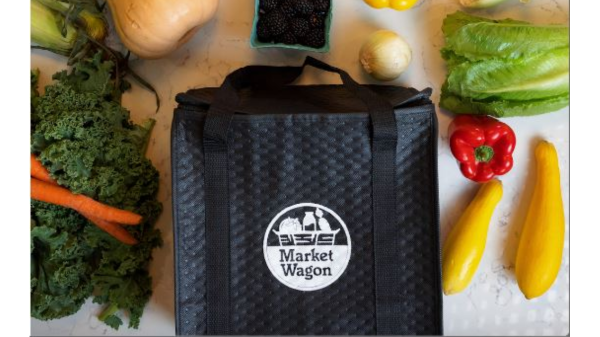 I am not the fan of farmers markets that I might be. There is one held every Wednesday within walking distance of my house in the western suburbs of Chicago, and it never occurs to me to go there, either by foot or by car.

I think I went there once to buy some local honey. But I didn’t bother after that, because the health food store in the same shopping center carries that item.

What is the point of farmers markets?

I mean for the shopper. My experience of farmers markets and farmstands has been remarkably uniform over the years. The prices aren’t any better (and often much worse) than those in the supermarket, and the quality is often uneven in both appearance and flavor.

It is locally grown, although I’m not even sure what that means when many of the sellers in my local market are from Michigan and other not-so-local places.

These thoughts occur to me in light of the recent announcement that Market Wagon, an online farmers market, was ranked number 450 on Inc. magazine’s 5000 list of the fastest growing companies in America, with 1,385 percent of revenue growth over the past three years.

Market Wagon started in 2018 operating three farmers markets in metropolitan areas of Indiana. It now runs more than 30 markets providing local, last-mile delivery to customers in 19 states, according to a company press release.

“Our selection is far and wide, from dairy, eggs, meat, and seasonal produce to sauces, seasonings, and beeswax candles,” company founder Nick Carter told Inc. “More than 1,800 farmers and food producers have joined. In our smallest markets, we have 20 to 30 farmers; in our flagship markets, it’s about 200.”

Carter credits the pandemic for his company’s boom. “Our fulfillment centers use a pallet racking system,” he says. “About two weeks into lockdown, we’d bought every available piece of racking east of the Mississippi. We had all the ice packs we needed, but we couldn’t get them frozen, so we were calling restaurants asking, ‘Is your freezer still plugged in?’ We had a lot of restaurants join Market Wagon because they couldn’t do dine-in. One thing they could do was use their kitchens to make meals—lasagna, mac and cheese, soups—freeze them, list them on Market Wagon, and make them part of somebody’s grocery budget.

“We knew we had a major opportunity, but we needed capital to scale up. A firm in Chicago called Hyde Park Venture Partners bet on us and invested in November 2020. To date, we’ve raised $11 million,” Carter adds.

This is all very nice, but am I going to shop on Market Wagon?

Some of the prices (as of this writing) are more or less in line with retail grocery: fresh-picked sweet corn at $12 for 14 ears.

But not most of them.

Carter claims that growers get 75 percent of the revenue.

Consumer ratings are mostly positive, with some blips: Rhonda B. tell us, “July 24th I purchased 2 cantaloupes, received one small and one large. However, they were extremely over ripe to the point by the next day they started to spoil. I salvaged as much as possible to eat. So disappointing.”

I just don’t see anything here that makes me want to buy. With the crush of inflation, I could imagine that many other shoppers would feel the same way.

That 1,385 percent growth rate is impressive—but those were the pandemic years. And the time since then have indicated very mixed prospects for online grocery in general.

Of course, there is a difference between real and virtual farmers markets. Maybe I’ll pay a visit to mine this week. I’m willing to be proved wrong.