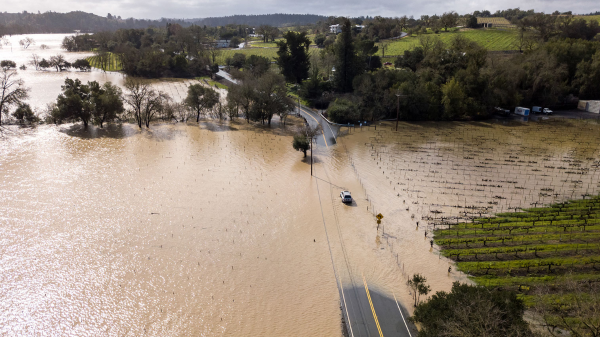 I remember the first three months of 1983. I was living in San Francisco. It rained every day. It didn’t rain all day every day—but it did rain every day.

This is the flip side of California weather. It’s not just drought—it’s a regular alternation of drought and deluge, often lasting over decades.

That year, a good portion of the west side of the state’s San Joaquin Valley (whose chief crop was cotton) was flooded.

The 1983 deluge was connected with the El Niño weather phenomenon—as commonly happens.

That was nothing. California is periodically subject to “atmospheric rivers,” which could dump 100 inches of rain in the course of a month.

“Atmospheric rivers are narrow bands of enhanced water vapor associated with the warm sector of extratropical cyclones over the Pacific and Atlantic oceans,” according to one study.

The state did experience a minor version of this event last October.

Technically, many West Coast storms are the result of atmospheric rivers, and most of them do not bring disaster.

But the last big one, in the winter of 1861-62, lasted 43 days (3 days longer than the one in the Bible). Sixty-six inches of rain fell on Los Angeles—four times the normal annual amount.

It no doubt answered the prayers of farmers for rain after two decades of drought. But not in a way they liked. It flooded much of the Central Valley and devastated the cattle industry, which then dominated the state’s agriculture: over a quarter of the cattle in California were destroyed.

The storm hit other states as well, including Washington and Oregon, as well as British Columbia and northern Mexico. The lower Willamette Valley of Oregon was flooded, as were Yuma, AZ, and southern Utah. Arid Nevada got 9 feet of rain in 60 days.

One newly published study indicates that California is overdue for another such phenomenon, whose effects are likely to be magnified by climate change.

The idea of such a deluge seems inconceivable now after two decades of drought in the West—but that was what preceded the floods of the nineteenth century.

The proposals issued last week by Gov. Gavin Newsom’s administration for fixing the strained California water system were warmly greeted—as they should have been.

Although the measures include plans to “create storage space for up to 4 million acre-feet of water, allowing us to capitalize on big storms when they do occur and store water for dry periods,” they are largely based on the assumption of continuing drought.

How would the state handle rains of the sort that flooded the Central Valley in 1862? It seems impossible to imagine.

California has proved to be brilliant at self-reinvention so many times in the past. Weather patterns may force it to do so again.