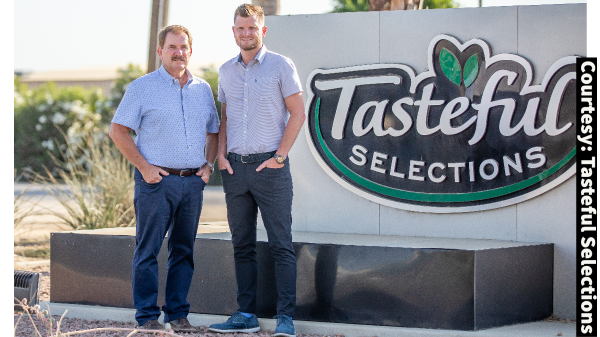 ARVIN, California — Nathan Bender, a 16-year agribusiness veteran and co-founder of baby potato category leader Tasteful Selections BB #:261804, has assumed the role of President at the organization he helped establish in 2010.

As part of Tasteful Selections’ comprehensive succession plan, when Bob steps down as CEO in 2023, he will remain on the Board of Directors. Bob will also oversee special projects in addition to commencing an advisory role.

“I have every confidence that Nathan’s vision will take us to new levels,” said Bob Bender. “Since Day 1, Nathan has worked tirelessly to help build the company from the ground up.”

The Benders are Nebraska natives. Nathan earned a bachelor’s degree in agribusiness from the University of Nebraska. In 2004, Bob Bender relocated from the Cornhusker state to California’s San Joaquin Valley. In 2007, Nathan joined his father in starting the baby potato operation.

Tasteful Selections has grown to more than 22,000 baby potato acres from its 250-acre humble beginnings. The baby potatoes are grown in Arizona, Nevada, Utah, Washington, Idaho and Oregon as well as California. Red, gold and purple offerings are packed and distributed in Arvin, California, near Bakersfield.

In his new role, Nathan will be transitioning to have full-company oversight of all day-to-day activities.

About Tasteful Selections
Tasteful Selections, LLC is a vertically integrated family-owned collection of farms — pioneering and leading the bite-size potato category. To ensure their high standards of quality, flavor and freshness, Tasteful Selections owns and operates the entire process of planting, growing, harvesting and packaging. Field to fork fresh in every bite.