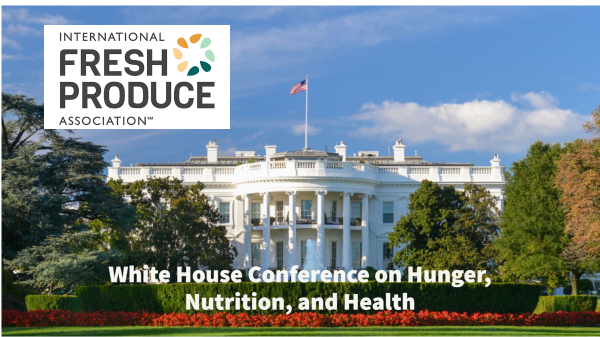 Last week, IFPA revealed its 8-point plan of recommendations on how fresh fruits and vegetables must be a critical part of the U.S. nutrition policy to be unveiled at the White House Conference on Hunger, Nutrition, and Health in September.

IFPA vice president of nutrition & health Mollie Van Lieu said July 26 that the details of the conference are expected to be announced this week, but she expects it to be one where nutrition plans are shared, rather than a working conference.

She said she and IFPA CEO Cathy Burns met with Biden administration officials a few weeks ago, presenting IFPA’s proposals and answering questions.

Van Lieu said she’s most optimistic about the produce prescription plan because it has the highest upside.

The plan would likely start with Medicare and Medicaid, and if produce prescriptions showed some benefits to people, private health insurers could begin investing in it themselves, she said.

What does the return on investment look like to insurers?

IFPA’s other recommendations consider that most people in every category don’t eat enough fruits and vegetables, so it wants to expand access and incentives for that to happen.

Van Lieu said IFPA recommends expansion of fresh produce benefits in government nutrition programs similar to the way they are in the WIC program, where they are tied directly to buying fruits and vegetables and not other foods.

“The recommendations are for additive benefits,” she said, not funding at the expense of other food groups, as that can get political and run into groups with much stronger funding than fresh produce.

“We tried to be big and bold with these” recommendations, Van Lieu said.

The September conference will be the first indication that they’ve been received.