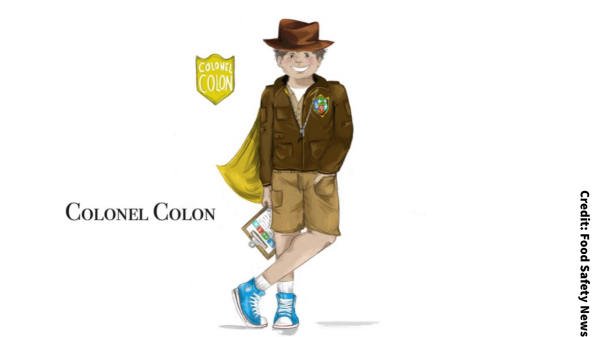 I sometimes joke that my favorite superhero is Bleachman.

Bleachman was an improbable character featured on ads in San Francisco in the late eighties and early nineties. Of course, he had the obligatory red cape, and his head was shaped like a Clorox bottle with a scowling face.

Bleachman was aimed at the city’s drug addicts, who were spreading AIDS through sharing needles. Bleachman’s objective was simple, clear, and blunt: if you are going to share needles, at least have the sense to sterilize them with bleach: “If you use the drug, you gotta use the jug.”

Bleachman won some affection among his target audience, although whether he really had much impact on HIV transmission isn’t entirely clear. At any rate, he has long since retired from his battles with the AIDS virus.

Bleachman has been joined in the Legion of Safety Superheroes by Colonel Colon and the League of Fecal Fighters, campaigning for food safety. The league was created by Bill Marler, the most prominent food safety litigator in the United States.

The colonel’s brigade includes “Clean,” whose superpowers are that he “cleans food and counter top, and keeps his water bucket ready for an extra rinse and shine!”

Then there’s “Separate.” Superpowers: “Separates food items with her kitchen knife and cutting board, and keeps germs from transferring from one dish to another.”

“Cook’s” uncanny abilities include the power to cook food to its safe internal temperature.

The final trooper, “Chill,” chills food and refrigerates perishable food items so that it [sic] remains clear of the Danger Zone. She always keeps her cooler at 40 degrees or below.”

Safety is a serious and ever-present issue, but it isn’t a very sexy one. Although Colonel Colon’s league is definitely comic in inspiration, like Bleachman, it’s using humor and the eternally popular concept of superheroes to sell its message of proper food handling.

I doubt whether Marler’s creations will lead to lucrative spinoffs along the lines of DC and Marvel, but they serve as a reminder of a number of things we ought never to forget.