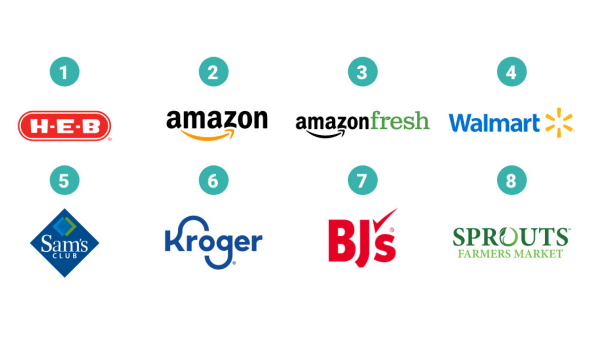 Walmart BB #:143789 landed in the fourth spot and Sam’s Club BB #:140368 rounded out the top five. Kroger, BJ’s and Sprouts had the next highest scores in the RPI, with all three finishing in the top tercile.

The dunnhumby eCommerce RPI was released today as part of The dunnhumby Quarterly: a new strategic market analysis of key retail themes, with the first edition being focused on eCommerce.

“H-E-B’s impressive performance proves that it’s possible to compete and win against Amazon when it comes to grocery e-commerce. Their success offers mid-size and regional retailers a roadmap on how to succeed online,” said Grant Steadman, President of North America for dunnhumby.

“H-E-B’s eCommerce journey goes back to 2015, when they first started with curbside pick-up, and they have since built up a powerful online ecosystem. The combination of a simple and easy to use shopping experience with a fantastic emotional connection with customers shows how grocers can thrive in this multichannel landscape.”

The overall RPI rankings are the result of a consumer survey-informed statistical model that predicts how retailers execute on the customer needs that matter most for driving eCommerce performance and emotional bonds with online shoppers.

The eCommerce RPI methodology calculates eCommerce performance through a composite score of Change in Web Visits (2019 to 2021) from SimilarWeb, Share of Wallet Online, and Online Penetration of a Retailer’s Total Shopper Base. Retailers’ preference driver score and emotional connection score were gathered from a customized, online survey of 3,000 U.S. households that shopped online at least once in the 30 days prior to being surveyed.

Key findings from the study:

The full RPI report can be downloaded today.

Retailers included in the RPI that are interested in receiving their individual banner profiles can speak with their dunnhumby account executive, or contact dunnhumby at: https://www.dunnhumby.com/contact/.

dunnhumby is the global leader in Customer Data Science, empowering businesses everywhere to compete and thrive in the modern data-driven economy. We always put the Customer First.

Our mission: to enable businesses to grow and reimagine themselves by becoming advocates and champions for their Customers. With deep heritage and expertise in retail – one of the world’s most competitive markets, with a deluge of multi-dimensional data – dunnhumby today enables businesses all over the world, across industries, to be Customer First.

The dunnhumby Customer Data Science Platform is our unique mix of technology, software and consulting, enabling businesses to increase revenue and profits by delivering exceptional experiences for their Customers – in-store, offline and online. dunnhumby employs over 2,500 experts in offices throughout Europe, Asia, Africa, and the Americas working for transformative, iconic brands such as Tesco, Coca-Cola, Meijer, Procter & Gamble and Raley’s.